In a country as diverse as South Africa, it is natural for there to be differing views and vigorous contestation, writes Minister in the Presidency Jeff Radebe. So it would be a mistake to assume the fracas in parliament during the State of the Nation Address on 12 February meant our democracy was on the edge of an abyss. 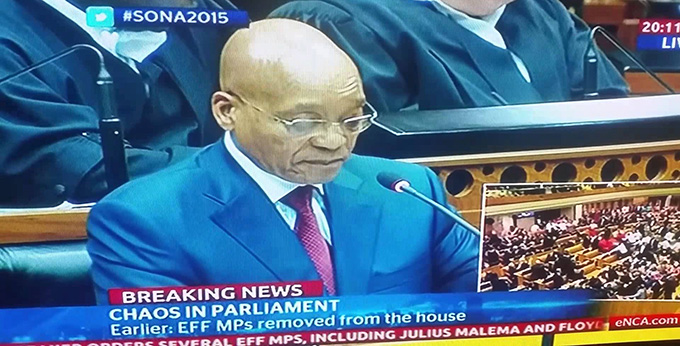 A frame from a news report on the State of the Nation Address in parliament on 12 February. (Image: YouTube/ECNA)


It’s all too easy to get caught up in a whirlwind of perceptions and to lose sight of the true state of play. It’s human nature to be consumed by the bluster of the here and now. Since the unprecedented fracas during the State of the Nation (SoNA) our national discourse has been ablaze.

Were one to judge the state of our nation on the headlines that followed SoNA alone, the appearance would be that South Africa stands on the edge of an abyss.

It is indisputable that the disturbing scenes in parliament last week were not in keeping with the spirit and conventions of our democracy. The government is appalled by the disruptive actions of those who were intent on demeaning the importance of the address.

However, to assume that what unfolded in parliament is a portent of the end of our democracy is incorrect. Democracies are by their nature defined by lively dialogue and differences over policy direction.

In a country as diverse as South Africa, it is natural there will be differing views and vigorous contestation. Indeed, this has been the hallmark of our democracy since 1994.

Democratic parliaments all over the world are robust in their nature and there have been many recorded incidents of disorder. It is, therefore, unfortunate some would seek to define our democracy on the strength of one incident. Any democracy is tested by the resilience of its institutions during turbulent times, and our parliament has passed the test. Our parliament still remains our beacon of democracy.

It is equally regrettable that the many policy interventions announced by President Jacob Zuma were overshadowed by the disturbance. The president unveiled an ambitious nine-point plan to stimulate growth and create jobs. He also addressed the interventions needed to stabilise the current energy challenges.

South Africa, like any other country, has its challenges and frustrations. That said, few would dispute that we have come a long way since 1994. Out of the ashes of apartheid has risen a nation recognised the world over for its commitment to the values of freedom and democracy.

Our Constitution stands as one of the pillars on which we have built a new society that serves all its people. I would like to believe that most fair-minded South Africans would concur that our democratic institutions are strong and functioning. The supremacy of the Constitution and the rule of law as stipulated at the birth of our young democracy remain untouched. Courts continue to function without fear or favour in accordance with the law. Furthermore, the Constitutional Court, the highest court in the land, continues to safeguard our democracy.

The importance of the Constitution cannot be overstated. It is the cornerstone of our democracy and guides us in all our endeavours. Its significance, as our moral compass, was underscored during Zuma’s response to the debate on the State of the Nation address when he said: “We also have a responsibility to promote the constitution, which is the blood and soul of our democracy.”

The separation of powers between the executive, the legislature and the judiciary also remains steadfastly in place. The architects of our Constitution cleverly built in the separation of powers to prevent a situation where one institution or arm of government would have absolute power. Most people would agree with me that these are the hallmarks of a fully functional democracy.