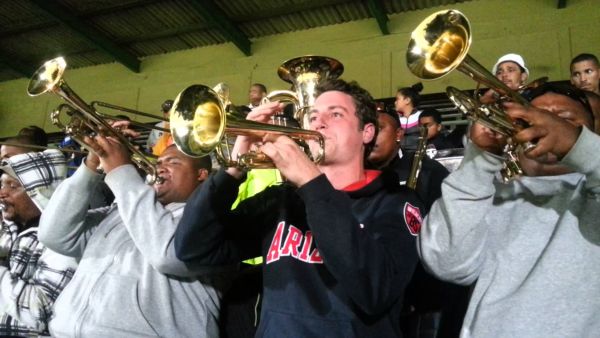 The St Georges Brass Band is about the music and cricket. “As long as you remember that, everyone is welcome to join,” says Jonathan Africa. (Image: Jonathan Africa)

It is a few hours before the first ball is bowled at St George’s Park. The sun shines, the city buzzes with excitement. In one corner of town a group in matching shirts warms up. Fingers are made limber, deep breaths are exhaled into mouthpieces. Pursed lips blow into reeds. The parps of trumpets and trombones rise.

Deep brassy clangs and high-toned hissing rise into the air as the St George’s Brass Band warm up at the home of band leader Jonathan Africa. Africa will lead his musicians to the stadium to soundtrack the day’s game, just as they have done for 20 years.

“In those 20 years the most memorable game, for all of us, was in 2010 when the Warriors won the (domestic) double. For us in the band, we were an important part of that win.”

Where fans in other grounds listen to piped music, local favourites or a seamless blend of hits, those at St George’s Park are treated to the vibrant, joyous noise of the St George’s Brass Band. “Our first game was a Benson & Hedges game. Eastern Province versus Border. That was 1994 and now, years later, we’re still here,” says Africa.

The first movement for the band was in 1994, when musicians from Cape Town played during a game at St George’s. Africa takes up the story: “After the game, (Eastern Province) Cricket decided they wanted a similar vibe at games. We got the nod from the late Phillip Potgieter and Malcolm van Eck. Once we got the nod, the band grew quickly and we became the St George’s Band in 1996.” 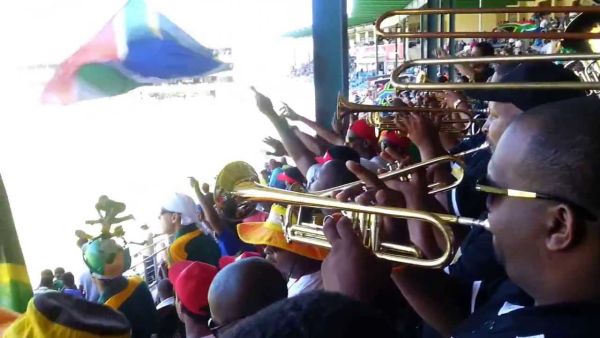 Twenty years later, the St George’s Brass Band is a uniquely South African institution. Newlands, in Cape Town, may have the mountain as a backdrop. But Port Elizabeth has the band – and the atmosphere that makes watching cricket there different.

The band puts to bed the image of Port Elizabeth as a quaint, sleepy little town. This is the city the locals know, full of people who do innovative things, who believe they can change the world and the way their city is viewed, with a loud, joyful, celebratory noise.

“We have grown. We do not just play at the cricket. We’re very active in our community. We are a community organisation aiming to develop our youth through music. Everyone can take part, every gender and race is welcome to take part in our training and development programmes.”

Musicians come from all over the northern suburbs of Port Elizabeth and from Zwide Township. Some split their time between the Band and the SAPS Eastern Cape Band. Some have gone on to be teachers. “We also take part in the Coon Carnival during Cape Town’s Klopse Festival. We’re part of the Heideveld Entertainers; look out for us.”

The late author and legendary athlete Dr George Sheehan described sport as theatre, a space where heroes were born and memories and hopes fuelled today’s passion. Sport was, he wrote, “singularly able to give us peak experiences where we feel completely one with the world and transcend all conflicts as we finally become our own potential”.

St George’s Park has given members of the band an opportunity to fulfil their potential while filling their lives with heroes. Men, and yes it is just men, who have given them memories to be passed on to their children and their children’s children are fondly recalled.

Give me Hope Johanna was the band’s first song, a favourite still despite their diverse repertoire. The band arranges and plays selected orchestral pieces, calypso and jazz. It is a range of music that celebrates what cricket means to its members.

Like cricket, music packs together a lifetime of emotions in a few strokes. Music, like cricket, allows the band to suffer and die and rise again. So it was heartbreaking when they were refused permission to play. “That was our lowest point. We were not allowed to play in 2003. During the (Cricket) World Cup. In our own backyard. We could never understand why, and the cricket administrators never felt a need to tell us.”

The Warriors, their fans and the members of the band are tied together. They exist to remind cricket fans of the warmth of the region’s people and the passion they feel for their team. The band celebrates what the city already knows: Port Elizabeth is the biggest small city.

Hard work, sweat and ingenuity have made the band famous beyond the boundaries of the city. Their existence, their influence have extended beyond the few hours of a game of cricket. They are, as far as Africa knows, unique in the world of cricket. “Twenty years not out, and more to come.” 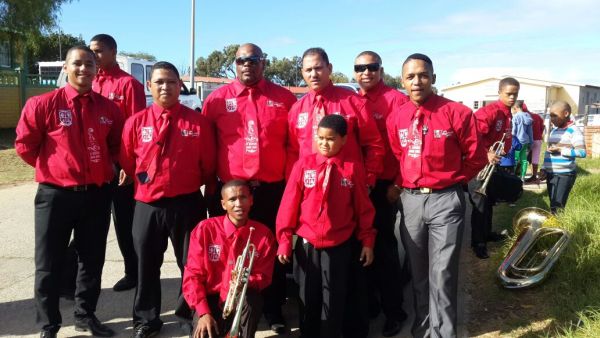 The Band is a community organization developing youth through music. (Image: Jonathan Africa)