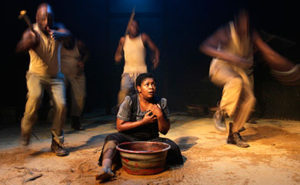 Warona Seane on stage in the play Ukutshona ko Mendi (The Sinking of the Mendi). (Image: Mark Wessels, Goethe-Institut )

The poem Ukutshona Kukamendi (The Sinking of the Mendi) by SEK Mqhayi sums the 1917 tragedy of the sinking of SS Mendi just off the Isle of Wight in the English Channel quite succinctly.

A reader may assume that the overall tone of the poem would be total indignation and hatred directed at the powers that be that sent 600 men, mostly from South Africa’s rural Pondoland in the Eastern Cape, to fight a war that was alien to them.

The men set sail from Cape Town on 16 January 1917 on their way to support the British Army in France during the First World War. Unfortunately, they were never to see their native country again.

Mqhayi’s poem is a praise piece. It reveals the deep sorrow of a nation that has lost some of its brave sons, swallowed by the deep blue sea on their way to fight for a worthy cause. It describes the last acts of 600 men, bravely accepting their fate as the ship sank on a foggy morning of 21 February.

The brave acts of the doomed South African men did not escape attention. Years later to recognise and honour the valour of the soldiers, any South African citizen who performs an act of bravery is awarded the Order of the Mendi.

Ukutshona ko Mendi . Did We Dance

Almost 100 years later, the sinking of SS Mendi and the last moments of the brave men on board has been brought to life in a play written by Lara Foot and directed by Mandla Mbothwe. Ukutshona ko Mendi . Did We Dance recounts the sinking of SS Mendi vividly. The title of the play describes the last dance of the barefoot “death dance’ performed by the Members of the South African Native Labour Corps (SANLC) on the deck of the SS Mendi as the ship took water and sank to bottom of the sea.

With support from the Goethe-Institut, the Rosa Luxemburg Foundation and the British Council, Foot and Mbothwe are taking the play to the Soweto Theatre from 25 to 30 November, after a stint at the Baxter and Market theatres earlier this year.

A statement from the organisers says the play has been met with great acclaim. “[The play] has been hailed as magical realism storytelling at its finest, conveying a uniquely South African story set against the backdrop of World War One,’ says the statement.

The staging of the play is part of a series of lectures, films and panel discussions organised by the Goethe-Institut to commemorate the centenary of the beginning of the First World War, the 75th anniversary of the start of the Second World War and the 20th commemoration of the 1994 genocide in Rwanda.

“We want to shed light not only on the European experience of the First World War, but also on the many South African stories linked to it – such as the tragedy of the SS Mendi, which is being told in this exceptional theatre production,’ says Norbert Spitz, Director of the Goethe-Institut South Africa.

On 16 January 1917, the SS Mendi troopship sailed from Cape Town to La Havre in France, carrying the 5th battalion of the South African Native Labour Contingent. About 805 black privates, 22 white officers and 33 crewmembers were on board.

Stories of the troops’ bravery is legend. It is said Reverend Isaac Wauchope Dyobha calmed the dying men by saying: “Be quiet and calm my countrymen, for what is taking place now is what you came here to do. We are all going to die, and that is what we came for.

“Brothers we are drilling the death drill. I say here and now that you are all my brothers. Xhosas, Swazis, Pondos, Basotho and all others, let us die like warriors. We are the sons of Africa. Raise your war cries my brothers, for though they made us leave our assegais in our kraals, our voices are left with our bodies.”

Today the SS Mendi is honoured by the South African Navy, which has among its fleet the SAS Isaac Dyobha, a warrior-class fast attack craft, and the SAS Mendi, a valour-class frigate. In 1995, Queen Elizabeth II unveiled a Mendi memorial at Avalon Cemetery in Soweto to commemorate the disaster. Another plaque was also unveiled at the Delville Wood Museum in France.

The Soweto Theatre season is primarily aimed at high school learners, hence there will be matinee performances at 3pm on 26, 27, 28, 29 and 30 November. There will also be 8pm performances on 25, 26 and 28 November 2014. However, the general public is welcome to attend any of the matinee or evening shows.

To book tickets to Ukutshona ko Mendi . Did We Dance log on to the Soweto Theatre website or call 011 930 7463. Discounts are available for block bookings and schools

As a follow up to staging of Ukutshona ko Mendi . Did We Dance, a free teachers’ workshop organised by the South African History Archive (SAHA), will take place at the Constitution Hill on Saturday, 29 November. To book a place please contact SAHA on 011 718 2560 or email info@saha.org.za.