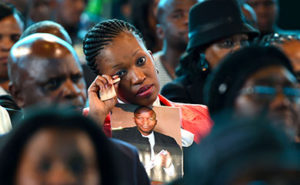 Families grieve for their departed relatives at a moving reception ceremony to welcome home the victims of the collapsed church guest house in Lagos, Nigeria. (Image: GCIS)

Two months after the fatal collapse of a church guesthouse in Lagos, Nigeria, the bodies of 74 of the South African victims returned home to an emotional reception ceremony.

The ceremony, held at a hangar at the Waterkloof Air Force Base in Pretoria on Sunday 16 November, was attended by the victims’ families, military officers and government officials. The formal proceedings included a prayer, a reading from the Bible, the singing of the national anthem and a moment of silence. The names of the dead were read out by Cassius Lubisi, the director-general of the presidency. The ceremony was broadcast live across the country on state television.

On 12 September this year 116 people, 81 of them South African, died when a guesthouse belonging to the Synagogue Church of All Nations in Lagos collapsed.

South Africa agreed to repatriate the remains of three Zimbabweans and one DRC national who were using South African travel papers, bringing the total number of bodies to be repatriated to 85.

Speaking at Sunday’s ceremony, Deputy President Cyril Ramaphosa said the return of the bodies was “a sombre moment for the people of South Africa”.

“The people who perished in that tragic event in Lagos, Nigeria on 12 September were not mere statistics,” he said. “These were people who lived among us. They are South Africans. They are a part of us. These people were our colleagues and friends.

“They were beloved wives, husbands, sons and daughters. They were our brothers and sisters. To the bereaved, we wish to say that, as a nation as a people, we share in your grief and sorrow. We understand that the loss you have suffered remains unbearable and incalculable.”

Ramaphosa said the families should take solace from the fact that all South Africans shared in their bereavement and the dead could now rest in peace in the land of their birth.

Uncontrollable cries could be heard from the families, with some people collapsing. Counsellors were on hand to console grieving relatives.

Earlier on Sunday, a cargo plane carrying 74 of the 85 who will be repatriated landed at the airforce base under strict security. The plane was met by justice minister Jeff Radebe, who chairs the interministerial task team set up to oversee the repatriation process, along with health minister Aaron Motsoaledi and social development minister Bathabile Dlamini.

A total of 12 victims were from the Eastern Cape, two from the Free State, 22 from Gauteng, 23 from Mpumalanga, 13 from Limpopo, six from North West, five from KwaZulu-Natal and two from the Western Cape. The only one province not affected by tragedy was the Northern Cape.

On Saturday, when the cargo plane carrying the victims left Lagos, Radebe thanked Nigerian authorities for their help and said the identification process had been difficult.

“Our medical team working with the Nigerian medical team has done a sterling job in this regard. Today we still sad about the tragedy but somehow relieved that the long wait for a number of the families will finally end.”