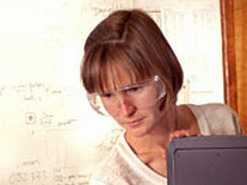 Dr Christine Steenkamp is hailed as a pioneer
in her field. (Image: SAASTA)

Laser physicist Dr Christine Steenkamp is one of three African women scientists, out of a group of 12, who recently received international recognition for excellence in research.

This year’s OWSDW conference took place in June 2010 under the theme Women Scientists in a Changing World. The conference and General Assembly had a number of joint aims, among them to promote interaction and exchange between women scientists in the South; to boost awareness of OWSDW activities; and to increase assistance from national and international organisations for research projects carried out by women scientists.

The awards were presented by funding organisation The Elsevier Foundation, the Academy of Sciences for the Developing World and OWSDW, and are each worth US$5 000 (about R38 000).

Through a grant made as part of The Elsevier Foundation New Scholar’s programme, three disciplines in each region – biology, chemistry, and mathematics/physics – were recognised. The winners received their prizes from Chinese vice president Xi Jinping at a ceremony in the Great Hall of the People in Tianenmen Square, Beijing.

“Encouraging the work of promising scientists in the developing world helps to promote wider participation and excellence in science. This is a key objective of The Elsevier Foundation’s New Scholars programme,” said the foundation’s executive director David Ruth.

Submissions were reviewed by the relevant regional OWSDW committee, and shortlisted candidates went under rigorous scrutiny from OWSDW regional vice-presidents as well as the current president Kaiser Jamil, before receiving a grading.

“The recognition that this provides will undoubtedly provide an invaluable boost to the promising careers of these young women scientists,” said Jamil.

Steenkamp took the mathematics/physics prize for Africa for her excellent contribution to science, particularly her pioneering work in the field of vacuum ultraviolet laser spectroscopy. She delivered a lecture at the conference on this highly specialised field of research.

Steenkamp obtained her BSc in physics and chemistry from Stellenbosch in 1996 and completed her MSc and PhD in laser physics at the same institution.

She is now a senior physics lecturer at her alma mater, and conducts her research at the university’s Laser Research Institute, where the small academic staff complement and postgraduate students carry out fundamental and applied research in laser science and technology, and related applications.

She attributes her choice of career to her father, also a physicist, who specialised in wood science. She has worked at the Max Planck Institute in Jena, Germany, and spent time doing research at the University of Colorado in the US – at the personal invitation of distinguished Nobel physics laureate Prof Carl Wieman.

Her research interests range from laser cooling and trapping of atoms, to chlorophyll fluorescence and nonlinear optics.

Steenkamp’s consistently high-quality output is all the more remarkable, said her TWOWS citation, because when she started her career in experimental physics there was very little research infrastructure available. Since then she herself has developed much of the equipment used in her work, and most of it is still not commercially available.

For instance, her design of a vacuum ultraviolet laser source is scientifically important, because the device is not only used to investigate the properties of super-cooled carbon monoxide (CO) molecules, but can also be used to measure spectra of CO isotopomers in a lab – something which has not been possible before.

Laser sources that provide light in the vacuum ultraviolet region of the spectrum are very limited, said Steenkamp in her TWOWS lecture, with only a few in existence worldwide.

Isotopomers are isomers – molecules with the same chemical formula, but different structural formula – that contain isotopic atoms. The latter are atoms of the same chemical element but with differing numbers of neutrons – they are found in the same numbers but in different positions on the molecule.

CO isotopomers are important because their spectra are implicated in the interpretation of results of interstellar space scans obtained by space stations. The astrophysics community, therefore, is keenly interested in Steenkamp’s innovation. She has published two papers on this work, one in the Astrophysical Journal and the other in the Journal of Molecular Spectroscopy.

This is not Steenkamp’s first award. In 1997 she received the Stellenbosch University Chancellor’s Award, given to the top final year student at the university. In 2003 she was one of three recipients of the Department of Science and Technology’s Women in Science fellowships, and in 2009 she took the Silver Jubilee Medal of the South African Institute of Physics.

Steenkamp has also published in well-established peer-reviewd journals, and has presented papers at a number of local and international conferences. 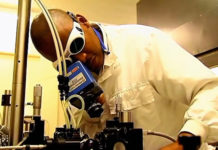 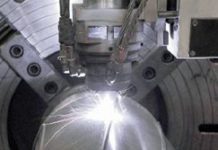