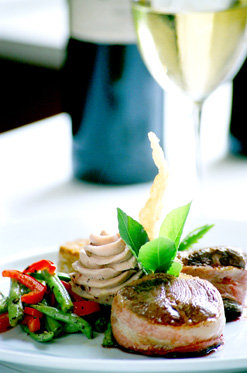 Fine food and wine in a restaurant in
Stellenbosch in the Western Cape.
(Image: MediaClubSouthAfrica.com. For
more free photos, visit the image library.)

A delicious way to experience the Rainbow Nation is through its food. Contributions from the cultures that created South Africa make its modern cuisine one of the most exciting in Africa.

For the more daring diner, South Africa offers culinary challenges ranging from crocodile sirloin to fried caterpillars to sheep heads. All three are reputed to be delicious.

For the not-quite so brave, there are myriad indigenous delicacies such as biltong (dried, salted meat), bobotie (a much-improved version of Shepherd’s pie) and boerewors (hand-made farm sausages).

Those who prefer to play it altogether safe will find that most eateries offer a familiar global menu – anything from hamburgers to sushi to pad thai to spaghetti bolognaise. And you can drink the tap water.

Restaurant guides list close to two dozen national styles, including Vietnamese and Swiss. On a single street in a Johannesburg suburb, one finds Italian restaurants, two or three varieties of Chinese cookery, Japanese, Moroccan, French, Portuguese and Indian food, both Tandoor and Gujarati.

Not far away are Congolese restaurants, Greek, even Brazilian and Korean establishments, and, everywhere, fusion, displaying the fantasies of creative chefs.

But there are niche specialities as well, and not a few surprises. Some of the world’s best curries can be found in Durban; fine French cuisine in Franschhoek; the freshest fish, caught only hours before, in Cape Town and Hermanus. Wine estates in Western Cape province offer meals, often French- or English-themed, along with wine tastings. High tea is on offer at most major hotels throughout the country: high tea at the Mount Nelson Hotel in Cape Town is a traditional treat.

Those in search of authentic South African cuisine have to look harder for those few establishments that specialise in it – like the justly famous Gramadoelas in central Johannesburg, Wandie’s Place in Soweto, the Africa Café in central Cape Town or smaller restaurants in that city’s Bo-Kaap, in Khayelitsha and Langa.

Basically, however, South Africans eat meat – and lots of it.

Lamb from the Karoo is highly prized. Game is ubiquitous: restaurants and butchers offer mostly impala or kudu, but springbok, warthog and crocodile are sometimes available. So, for the brave, is the mopani worm, the caterpillar of the emperor moth, which is boiled, then sun-dried. Ostrich goes as guilt-free red meat, low in cholesterol and farmed in the Karoo.

Whatever the meat chosen, there are braais – or barbecues – everywhere: on the pavement during the week, as fast food for labourers; and in backyards in the suburbs on weekends.

What goes on the backyard grill will almost certainly be boerewors, a spicy sausage and as close to a national food as one can get. Steak houses may specialise in flame-grilled aged sirloin, but they also offer boerewors. Even celebrity chefs become involved in boerewors cookouts.

There are varieties of biltong in every café, in big cities and little dorps. Every weekend there wafts from neighbourhoods rich and poor the smell of spicy sosaties being grilled over the braai.

It was the search for food that shaped modern South Africa: spices drew the Dutch East India Company to Java in the mid-1600s, and the need for a half-way refreshment stop for its ships rounding the Cape impelled the company to plant a farm at the tip of Africa. There are sections of Commander Jan van Riebeeck’s wild almond hedge still standing in the Kirstenbosch Gardens in Cape Town.

That farm changed the region forever. The company discovered it was easier to bring in thousands of hapless slaves from Java to work in the fields than to keep trying to entrap the local people, mostly Khoi and San, who seemed singularly unimpressed with the Dutch and their ways. The Malay slaves brought their cuisine, perhaps the best-known of all South African cooking styles.

The French Huguenots arrived soon after the Dutch, and changed the landscape in wonderful ways with the vines they imported. They soon discovered a need for men and women to work in their vineyards, and turned to the Malay slaves (and the few Khoi and San they could lure into employment).

Much later, sugar farmers brought indentured labourers from India to cut the cane. The British, looking for gold and empire, also brought their customs and cuisine, as did German immigrants.

In the 20th century, Chinese workmen and Japanese entrepreneurs arrived to seek their fortunes.

While all these groups brought new customs and cuisine, black communities continued to eat their traditional foods: beef and game, sorghum, maize, root vegetables and wild greens like morogo.

Today the resultant kaleidoscope – the famous “rainbow” – applies not only to the people but to the food, for one finds in South Africa the most extraordinary range of cuisines.

This web-based magazine carries interesting articles about food in South Africa and abroad, written by some of the best-known foodies in the country. It also offers book reviews and recipes.

The site of the international society devoted to fine dining lists events of the various baillages, or chapters – there are six in South Africa. These gatherings are usually black-tie dinners at top restaurants, but are occasionally more informal events.

Mainly for professional chefs and restaurateurs, the site offers links to chefs’ associations worldwide, a job site with posts in South Africa and overseas, a list of industry events and food festivals, and pages by a range of chefs, many with recipes. Also on the site: the Centre for Culinary Excellence, with information about master classes for chefs wishing

The website of the chef’s academy, restaurant and catering service named for Prue Leith OBE, who keeps a close eye on it. The board includes some of the major names in South African gastronomy.

The website of one of the top chef schools in the country, the SA Chefs Academy. It includes links to a few other food sites and some ezines.