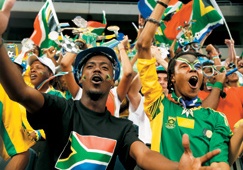 As South Africa gears up to host the world of football, South Africans are being called on to get behind their national football team, to be a part of the buzz around the 2009 Fifa Confederations Cup and 2010 World Cup – and to be good hosts to the football fans that visit the country.

The 2010 Local Organising Committee, the International Marketing Council of South Africa (IMC) and South African Tourism have put their heads together and come up with six ways in which you can be a great 2009 and 2010 host.

They’re simple, they’re fun do, and they’ll make you part of the action that’s going to unfold between now and that final match at Soccer City, Johannesburg on Sunday, 11 July 2010. So the only question is …

Know what’s going down in your own backyard. For pretty much everything you might need to know – about the teams, the venues, the dates, the host cities, the work that’s going in to get the country geared – check out:

Learn to sing the national anthem. Fly the national flag. We’re footballing into the future – don’t be left behind!

We did it in 1996, and Bafana Bafana came out of international isolation to win the African Cup of Nations. Co-hosts South Korea got behind their team in 2002, and their team responded by upsetting favourites Spain in the quarterfinals to become the first Asian team to reach the World Cup semifinals.

Germany did the same in 2006, and their team – previously written off at home and abroad – went as far as extra time in the semifinals before bowing out to eventual tournament winners Italy.

-Bafana Bafana for the Confederations Cup semifinals – “win two to go through” – yes, we can!

All you Gunners and Red Devils fans in SA – support Man U/Arsenal and a PSL team!

Find out more about Bafana Bafana:

… Get yourself a makarapa. Wear a Zakumi badge. Follow the games. Talk about them over a pap ‘n vleis braai. Get interested. Do any of these things in the spirit of Bafana, and you can count yourself a Bafana Bafana fan!

Buy yourself and your kids/granddad/partner/buddy tickets to a Confederations Cup match. Maybe you’re the CEO? Buy tickets for your staff – it’ll be the best (and cheapest) corporate bonding outing you ever organised!

6. Do things THE RIGHT WAY

-Get to the stadium an hour before the game.
-Check your ticket, know your number, and sit in your designated seat.
-Don’t use the steps as seats.
-Don’t bring bottles or other “cellular” to the stadium (if you know what we’re talking about, then we’re talking to you!)