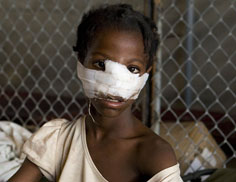 South Africa has acted swiftly in response to the devastating earthquake that hit Haiti’s capital Port-au-Prince earlier this week.

The country’s government, private companies and charity organisations have pledged to help the Caribbean island nation through an aid package that will be delivered by the National Disaster Management Centre.

Government has put R1-million (US$134 970) towards the relief effort that will be led by prominent NGOs Rescue South Africa and Gift of the Givers. Private companies, Vodacom, Discovery and Netcare have also come on board and donated funds for the mission.

Vodacom, a leading cellular network provider in the country, has given Rescue South Africa R1.5-million ($202 279) to fly out a team of 40 professionals, including trauma doctors, paramedics, search-dog units, specialist rescuers, civil engineers and chemical and safety specialists.

“We are honoured to have been able to lend a hand to Rescue SA on their mission to assist the people of Haiti with medical services,” chairperson of the Vodacom Foundation, Mthobi Tyamzashe, said in a statement.

Tyamzashe announced that companies in the Vodafone Group, of which Vodacom is part, have also contributed to aid for Haiti. Vodafone in the UK and Spain have each donated more than R300 000 (about $40 403) to the Red Cross to boost its mission, he said.

Gift of the Givers’ 10-member search and rescue team left for Haiti on Thursday evening. The team includes a group of professionals skilled in disaster response, urban rescue and life support.

The organisation said its team took R2.5-million ($337 372) worth of rescue equipment with them, which will be used to locate survivors trapped in the rubble. They also have a “substantial amount of essential and emergency medicines” with them.

Gift of the Givers’ team of skilled trauma medical specialists – including orthopaedic, trauma and maxillo facial surgeons, anaesthetists and advanced life support paramedics – is expected to depart for Haiti over the weekend.

The organisation said response from donors has been “very good” and they’re hoping to fly R5-million ($674 558) worth of supplies – including tents, blankets, water purification tablets, high energy and protein supplements, bottled water and additional medicines – over as soon as a Boeing 747 becomes available.

Rescue South Africa and Gift of the Givers are highly experienced in leading critical aid missions on behalf of South Africa. They were both heavily involved in helping Mozambique in 2000 when that country was hit by massive floods.

The Salvation Army in South Africa has also appealed to the public to make donations to help it extend its humanitarian efforts in Haiti.

Messages of support for the people of Haiti have been pouring in from South Africa, with President Jacob Zuma sending his official condolences to the country on Wednesday.

“Our thoughts and prayers go out to those who have been affected by the earthquake either emotionally and psychologically, or through the loss of life of loved ones or destroyed infrastructure,” Zuma said in a statement.

Former Haiti president Dr Jean-Bertrand Aristide, who’s been in exile in South Africa since 2004, expressed his intention to return to mourn with his country. But it is not yet clear when he will make the trip.

“It is a tragedy that defies expression; a tragedy that compels all people to the highest levels of human compassion and solidarity,” Aristide said. “From Africa, the ancestral home of Haiti, we send our profoundest condolences and love to the thousands of children, mothers, fathers, brothers and sisters worst affected.”

The earthquake hit Port-au-Prince, which has a population of about 3-million, on Tuesday, registering 7.0 on the Richter scale. About 50 000 were killed in the quake, which destroyed one in every 10 homes in the city and left about 300 000 people homeless, according to the United Nations.

It also decimated critical buildings, including the country’s Parliament, schools, hospitals and tax office. Rescue and recovery efforts are continuing as thousands of victims, many feared dead, are still trapped under rubble.