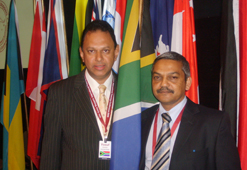 Yusuf Abramjee, head of Crime Line
(right) and Assistance Commissioner
Vinesh Moonoo at the CSI conference
shortly after South Africa was formally
welcomed onto the board of directors.

The announcement was made to hundreds of delegates at the 30th annual CSI conference, which is underway in Broad Beach, Queensland, Australia.

At the same time, three South Africans were formally welcomed onto the Board of Directors of the worldwide crime combating body – a first for the African continent.

Crime Line, the anonymous 32211 sms tip-off service, and  www.crimeline.co.za has recorded almost 830 arrests to date and R31-million worth of confiscations.

South Africa was the first country to introduce text or sms messaging in the fight against crime just over two years ago and various countries followed. The initiative has the support of national and provincial government and is fully endorsed by the SAPS.

Addressing delegates at the CSI conference, Abramjee said: “We will continue to form partnerships and share the South African experience. At the same time, we are here to learn from other countries. We have one global enemy – crime. We must all work together and fight this scourge.”

He said South Africa was ready to spread the Crime Line and CSI message to all corners of the African continent. Ghana, Nigeria, Namibia and Botswana are some of the countries that have already shown interest.

“In line with the CSI motto, ‘Helping to stop, solve and prevent crime – together’,” we will assist and advise wherever we can,” Abramjee said.

Commissioner Moonoo said: “The SAPS encourages communities to continue to blow the whistle on crime. Please pass on information anonymously using Crime Line (sms 32211) or call Crime Stop (08600 10111). The successes achieved thus far are phenomenal. We will also focus more on fugitives in the future.”

Speaking at the conference, Field Commander for “Operation Infra-Red” and representative of Australia’s Victoria Police Intelligence and Covert Support Department, Valentine Smith, announced that South Africa recorded the highest number of visits to the CSI website in June 2009 when the operation was launched.

Over 120 photographs of the world’s most wanted were posted onto the Crime Line website and many were published in the South African media. There were also links to the Crime Stoppers International (CSI) website.

“Almost 40% of the visitors to the CSI website in June were from South Africa. The actual number was 23 313. This is phenomenal considering that we gave Crime Line 48 hours to launch the wanted campaign in South Africa,” said Smith.

“We also received a number of tip-offs from South Africa and investigations into many of the cases are continuing,” he said.

Eight fugitives were re-captured in various parts of the world, while a further 45 fugitives have possibly been located. Some 37 of these are pending or following extradition processes. Among those recaptured are major drug dealers, murderers, a rapist and sex offenders. Drug smuggler Bruce “Vito” Veniero, who was being sought in the US, was nabbed in Argentina after being on the run for 10 years. He is known as the “Grass King of the US”.

Smith said the success of “Operation INFRA-Red” in South Africa was largely due to the massive media support. “Other countries should talk to the South African delegation and learn from them. The media in South Africa must be praised for the awareness it created around this global fugitive round-up operation.”

James Schield, Chief Inspector from the United States Marshals Service said “the world is getting smaller. There is an increase in mobility of people. We have to continue to establish relationships all over the globe. The priority is to investigate, locate and arrest fugitives.”

Operation INFRA-Red will be back next year. “We will fully support it and based on this year’s success, we will punt it extensively in South Africa and other parts of the continent,” said Abramjee.

The buzzword at this year’s conference was “partnerships”. Communities, law enforcement agencies, business, including the media, have been urged to work “together” in the fight against crime.