International media to get first-hand view of the expansive nature of South Africa’s infrastructure, its highly rated institutional base and the progressiveness of the country’s innovation – from Arts and Culture to the Energy sector. 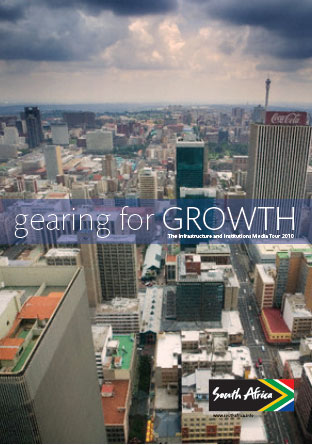 26 November 2010, Johannesburg – As South African leaders focus on a new growth path for the country, the International Marketing Council (IMC) of South Africa will host a delegation of journalists from Brazil, UK, China, Kenya, Egypt, Nigeria, the Netherlands and Russia between 27 November and 4 December 2010. The tour, themed ‘Gearing for Growth’ focuses on three fundamental aspects of South Africa’s growth story: infrastructure, energy and the economy’s institutional base.

According to the latest World Economic Forum’s Global Competitiveness Index (WEF GCI) South Africa’s infrastructure ranked 63rd out of 183 countries, with quality of air infrastructurebeing highlighted as a particular area of strength, this as a result of major enhancements made to both domestic, regional and international airports over the last few years in the run up to the 2010 World CupTM. South Africa is one of the top performers when it comes to investor protection (ranked 10th by WEF GCI) as well as the ease of doing business, where the World Bank Index shows SA as rated 34th in terms of ease of doing business.

“By offering to acquire South African retailer Massmart for an estimated $4.2 billion, Wal-Mart, the US retail giant, recently joined the parade of global companies looking to take advantage of South Africa’s developing infrastructure and strong institutional base to expand into the world’s last great investment frontier, the African continent,” said Miller Matola, CEO of IMC.

We take this opportunity to show that this new sense of optimism about South Africa and its continent is justified. South Africa’s successful hosting of the 2010 FIFA World CupTM is evidence of the country’s broader capacity to render terms like first and third world obsolete.

The tour programme aims to demonstrate the manner in which South Africa is able to operate successfully in both the developing and developed market contexts. It includes participation from the Presidency, Department of Arts & Culture, the City of Johannesburg, the Competition Commission, Johannesburg Stock Exchange, IMPERIAL Logistics, South African Sugar Association, SuperSport, Nandos, Metro Trading Company, MTN and Sasol.

The programme also includes the IMC/Financial Times Executive Dinner, with this event focusing on entrepreneurial development, specifically in the Arts, Culture and Heritage sectors and South Africa’s investments into the Energy sector. It also facilitates a discussion about the architecture of our infrastructure through a panel discussion with focusing on design in South Africa.

Matola said that the experiences linked to this media tour will facilitate an understanding of the ability to move people and goods around South Africa freely, on a preferred mode of transport, cost effectively and efficiently.  The experience will also highlight the capacity and innovation to deliver power to all South Africans and international markets; and South Africa’s efficiency and innovation-driven leadership when it comes to our institutions.

“It is our hope that through this tour, we can showcase why South Africa deserves to be rated among the world’s most dynamic developing markets. It is through these engagements that our international guests will realise our ability to think differently, our ability to see possibility and growth,” Matola concluded.