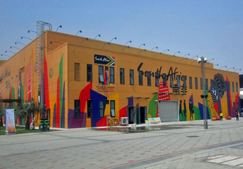 The South African pavilion at
the Expo 2010 in Shanghai, China

Themed Ke Nako! Or “It’s Time”, South Africa’s pavilion at the Shanghai Expo has opened its doors to visitors wanting to learn more about what modern-day South Africa has to offer.

The Shanghai Expo’s theme of “Better City, Better Life” is embodied in South Africa’s stunning pavilion with a design inspired by a traditional Southern African rondavel round house, interpreted in a modern way fusing traditional designs with modern materials.

The Pavilion invites visitors on a journey which is truly South African with experiences ranging from traditional artefacts, to world-class wines and modern urban living solutions.

The expo runs from 1 May till 31 October

Each month, the Pavilion will promote a different theme including the 2010 Fifa World Cup; re-modelling of urban communities; tourism and heritage; environment and climate change; and trade and investment.

South Africa will profile its economy by introducing some of South Africa’s pillar industries including agro-processing, beneficiated metals and mining technology, defence technology, ICT, as well as bio-fuels and alternative energy.

As the fourth Expo which South Africa has participated in, it is also the largest Expo ever held. With nearly 300 pavilions covering an area of 5.28 square kilometers, Shanghai Expo is expected to attract over 100 million visitors.

The pavilion was formally opened this week by International Relations Minister Maite Nkoana-Mashabane at a ceremony attended to by the department’s deputy director-general for Middle East and Asia Sisa Ngombane, South African Ambassador to China N Ntshinga and South African consul-general in Shanghai Vika Khumalo.

In what is seen as the biggest demonstration to date of South Africa’s view of China as a strategic partner, Nkoana-Mashabane’s visit is the first of a series of high level visits expected during Shanghai Expo.

As a key strategic partner for South Africa within the South-South cooperation, the bilateral relationship with China is at its strongest since formal diplomatic relations were established between the two in 1998.

Positioned as a gateway to Africa for investment and trade from China, participation at Shanghai Expo becomes relevant when considering that in 2009 the total trade between China and Africa amounted to over US$106-billion, an increase of 45% over the previous year, of which South Africa accounted for 20%.

Meanwhile, China’s imports from Africa amounted to $56-billion, an increase of 54% over the previous year.