“No grievance can ever justify the cold-blooded murder of fellow human beings, the destruction of property, or the displacement of hundreds of people – including women and small children,” says President Jacob Zuma, who has set up a ministerial task team to help stop the attacks against foreign nationals in Durban and Johannesburg.

The South African government is taking steps to bring the latest outbreak of attacks against foreign nationals in KwaZulu-Natal and Gauteng under control.

President Jacob Zuma cancelled a trip to Indonesia and visited refugee camps in Durban on Saturday.

Zuma is to host consultative meetings with representatives of business, labour, youth, creative industries, women, sports, social-development sector and others to discuss South Africa’s migration policy. He will also meet leaders of organisations representing asylum seekers and refugees as well as the media.

Under discussion will be how society groups can work with government to promote orderly migration and good relations between citizens and other nationals, the Presidency said in a statement on Monday. This would ensure that the shameful attacks on foreign nationals would not recur in the country.

“Foreign nationals have for years been successfully integrated into many communities in the country and government seeks to gain lessons from these successes,” the Presidency said.

Zuma said that while he understood the grievances about the implementation of the migration policy that have been raised by some citizens, none justified the taking of human life as well as the destruction and looting of shops belonging to foreign nationals.

“No grievance can ever justify the cold-blooded murder of fellow human beings, the destruction of property or the displacement of hundreds of people including women and small children.

“Millions of South Africans condemn these atrocious killings and abhor xenophobia and all related intolerances. Together we must work harder to root out violence and hatred in our society,” Zuma said.

Zuma has established a ministerial task team to help stabilise the situation and spread the message that South Africa will not tolerate violence. The team comprises ministers from the Justice Peace Crime Prevention and Security Cluster assisted by the ministers of Small Business Development, Trade and Industry and Social Development.

Zuma, who had been scheduled to leave for Indonesia on Saturday, instead arrived in Durban for tour of two refugee camps. Deputy President Cyril Ramaphosa will represent South Africa in Indonesia.

There were cheers when Zuma told the hundreds of refugees encamped on a sports field in the Westcliff area of Durban’s Chatsworth suburb that the government would help them to address their concerns, whether it was to stay in the country or to return home.

“We are not saying to you go away as government. It is yourselves who are saying that you need to be helped to go home,” he told them.

In a statement on Saturday night, Zuma urged South Africa’s religious leaders to pray for peace and friendship. He said the majority of South Africans believed in peace, unity and friendship and had nothing to do with the incidents of violence that have taken place.

South Africans know “that where there are concerns and differences, these should be resolved the South African way through dialogue and not through violence and intimidation. We will work with all peace loving South Africans and foreign nationals to promote peaceful co-existence, solidarity and friendship,” he said.

In Pretoria, Gigaba said that those involved in xenophobic attacks would be dealt with firmly: “We want to issue a stern warning to those who lend themselves to acts of public violence. We will find you and you will be dealt with to the full might of the law.”

Gigaba said 307 people have so far been arrested for related acts since the attacks broke out over a week ago and they would face prosecution. He said there were “elements” who were taking advantage of the violence to plunge the country into anarchy.

Police Minister Nathi Nhleko was in Durban on Sunday to launch the “We Are One Humanity” campaign, which aims to combat Afrophobia through celebrating diversity and embracing differences, create a new generation of Africans free of Afrophobia, and develop empathy through public education.

Zulu King Goodwill Zwelithini was scheduled to hold imbizo against the attacks on foreign nationals at Durban’s Moses Mabhida stadium on Monday morning.

The imbizo, which is being organised by the royal household and provincial government, is in support to government efforts to curb the violence on foreign nationals. 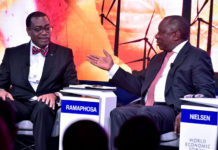