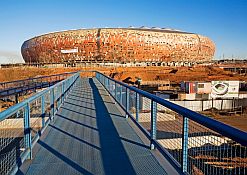 Soccer City stadium rises above Johannesburg’s skyline as a symbol of rich cultural diversity and African pride – and, thanks to some innovative partnerships, it’ll remain a tourist draw card long after the last World Cup goal is scored there.

Although the post-tournament viability of the R3.4-billion (US$461-million) facility – which will host both the opening and closing matches – has been questioned recently, a steady stream of tour groups since January point to its income-generating potential over the long term.

There are currently seven Soccer City guides who conduct 90-minute tours focusing on the history of the stadium and the importance of its design. Some 7 000 individuals signed up for tours in March alone.

“Everything about the stadium has its significance, from its shape, its colour, the seating and the architecture,” said Soccer City guide Letlohonolo Mokone.

The stadium is designed to look like the African pot, or calabash, which is used to brew beer. It rests on a raised stand that represents a pit of fire. With a capacity of 94 000, the stadium is one of the largest in Africa.

“The stadium is in different shades of red, which symbolise the fire,” said Mokone. “There are glass windows around the stadium, and at night when it’s lit up you can see the proper affects. It looks like something is brewing in the African pot.”

The stadium is above all a symbol of Africa and the diverse cultures that will mix during the World Cup, inside the stadium, he added.

The chairs are orange, the closest shade to gold, to symbolise the area’s mineral wealth and many mines. The tunnel that joins the field to the change rooms is designed to look like a mine shaft, giving the players who run through it a feel for the history of Johannesburg, which was once called “The City of Gold”.

Bringing in the bucks

After the World Cup, Soccer City will be handed over to the Johannesburg Metropolitan Municipality, which will ensure that the facility continues to function and bring in funds.

The municipality has hired a task team to supervise the process. “We will be doing ongoing tours after the World Cup and are anticipating that large numbers of people will continue to show up,” said Clifford Duffey of Stadium Management South Africa.

To make the stadium and the tours more sociable and marketable, Duffey said they plan to have coffee shops and merchandise stores set up where visitors can sit and relax before and after tours or games.

“We are also planning on using the auditorium, which takes 200 people, to show short videos about the history of the stadium. This will include footage on the build-up to the World Cup, which will be shown to visitors as part of the tours,” he said.

Duffey said the municipality will get tenant teams to use the stadium on an ongoing basis. It’s also currently in serious talks with the Premier Soccer League (PSL) to have at least 25 to 50 big games played there each year.

One of the first major clashes at the stadium will be the Nedbank Cup final in May between the two top PSL teams. The league plans to sell 80 000 tickets for this game, which will be used as a test run before the World Cup kicks off in June.

The name of the stadium will also be changed to National Stadium after the World Cup, Duffey said.

“The stadium is an iconic structure that all South Africans can be proud of. It was not only designed for soccer, other sports – such as rugby – can be played here too.”

Soccer City was rebuilt from the FNB stadium that was established on the outskirts of Soweto in 1987. Over the years it has witnessed some of the nation’s most poignant sporting and political triumphs, and human tragedies.

In 1990 thousands of South Africans gathered there for the first public address by Nelson Mandela after his release from prison. Just years later in 1993, mourners gathered at the same place to pay their last respects to assassinated South African Communist Party leader Chris Hani.

In brighter times, in 1996, the stadium hosted the African Cup of Nations, which national squad Bafana Bafana won. South Africans are hoping that the revamped site will bring the same luck to the national team 14 years on, when they face Mexico there on 11 June.