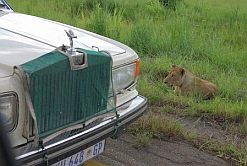 The adventures of South African septuagenarians Mike and Jeanette van Ginkel, who undertook an ambitious trans-Africa journey that would have daunted many a younger person, are to debut on international television in September 2009.

The 10-part series, titled Silver Spirit – An Epic African Adventure, shows in the UK on Southern Direct on Sky channel 270, starting at 19h30 UK time. The first episode can be seen on Wednesday 9 September, with successive episodes following on a weekly basis.

The series is also accessible via internet streaming on the Southern Africa Direct website. South African viewers will have to add an hour to the UK screening time. SA Direct has said that it is working towards getting the series onto local television stations.

For those who don’t have access to Sky or a fast internet connection, the series may be purchased on DVD – enquiries may be emailed to SA Direct.

The elegant couple, who have been married for 53 years, decided towards the end of 2007 that age was no barrier to a life of excitement, and began to envision the ultimate road trip – a journey in their 1981 Rolls Royce Silver Spirit from Cape Town to London, via Cairo.

This would be the first time a Rolls had ever made such a journey and although she only had 100 000km on the clock, a few modifications, such as a raised suspension and reinforced undercarriage, would still be necessary.

Six months in the planning, the adventure took to the road at the end of March 2008. On 29 May they reached London, having negotiated 17 800km through 12 countries.

Adventure clearly runs in their blood: in 1969 and 1972 the van Ginkels won the prestigious State President’s Air Race, a double win that has not been repeated. Mike ran a flying school in George for many years, while Jeanette in 1977 became the first licensed hot air balloon pilot in South Africa. Around the same time the couple started the Pioneer Balloon Club.

For the epic overland trip Mike and Jeanette recruited a host of experts. For planning, support and backup they turned to veteran explorer Roger Pearce, mechanic Steve Pickering and paramedic Marc Campbell-Gibson. Filmmaker and cameraman Koos Roets, who directed the 1991 South African comedy The Angel, the Bicycle and the Chinaman’s Finger, among other productions, came on board to capture the trip on film.

A trial run over the Sani Pass, the road that connects Lesotho with KwaZulu-Natal province, proved successful. Normally the Sani Pass is accessible only to 4×4 vehicles, unless with prior approval from the administrator.

Having obtained the necessary permission and made the modifications, the team set off, and the Rolls took the treacherous road in her stride, proving that she was capable of tackling the cross-continental journey.

The goal was to make the trip, which ran up the eastern side of the continent, in 60 days. The expedition set off from Cape Town on 30 March 2008, taking four days to pass through Stellenbosch, the small Victorian town of Matjiesfontein in the Klein Karoo, Kimberley, and Johannesburg.

The team left South Africa on 3 April, crossing into Botswana at the border post of Groblarsbrug and spending a night in Francistown before driving to Kazangula Ferry to cross into Zambia. Here they spent a couple of days, and enjoyed a stay at the Mutinondo private game lodge in the north of the country.

From Zambia the team crossed into Tanzania at the Mbeya border post. From Mbeya they travelled to Morogoro, then to Arusha in northern Tanzania – without catching a glimpse of the magnificent Mount Kilimanjaro, as she was clouded over – and from Arusha to Nairobi in Kenya.

From Nairobi they drove to the Sarova Shaba Lodge on the periphery of Shaba National Reserve, where they spent a few days. Sarova Shaba was at one time the home of renowned conservationists George and Joy Adamson.

Still in Kenya, next they travelled to Marsabit and then to Moyale, on the Ethiopian border. After just 17 days, they were already halfway across the continent. The team spent about a week in Addis Ababa, an unfortunate delay while waiting for Sudanese authorities to approve their visas but an opportunity to explore Africa’s fourth largest city.

While travelling through the Ethiopian highlands on the way to Sudan, the team recorded a record high altitude of 3 109m above sea level, higher even than the Sani pass. Soon after, they crossed the Nile river, and from the ancient city of Gondar in northern Ethiopia, they headed for the Sudanese border.

By that stage the Silver Spirit was taking some strain and suffering from a leaky radiator and loose engine mountings, among other glitches. But she pushed on and they made it to historic Khartoum, where they spent five days having the car repaired – and enjoying some South African fare in the form of fast food chains Steers and Debonairs.

On day 29 it was back on the road, heading for Wadi Halfa, on the Egyptian border, via Dongola. They encountered another delay getting into Egypt, as the cars were held back for an extra few days, and they were forced to spend some time in Aswan.

Finally the cars were released and they hit the roads of Egypt, driving along the Nile to the ancient city of Luxor and from there to Port Ghalib on the shore of the Red Sea, Hurghada, and finally Cairo – 42 days after setting out.

Once there they met Cairo governor Abdul Azim Wazir and presented him with a letter of goodwill given to them by then Cape Town mayor Helen Zille, now premier of the Western Cape.

After a few days’ rest in Cairo it was off to Alexandria, where the cars were loaded into containers for the ferry crossing to Naples. The team travelled back to Cairo and flew to Rome, where they were able to spend a few days sightseeing in Naples, Pisa, Florence, Capri and Pompeii before the arrival of the cars.

The cars were finally good to go on day 55 and the drive straight across Europe began. From Naples the team drove up to Maranello, then Cannes, over the world’s highest bridge at Millau, through Arras and Calais, and finally arrived on schedule in Goodwood in south-east England, the modern home of Rolls Royce. After 60 thrilling days the historic trip was over, and it was time to relax.

The team arrived back in South Africa on 26 June, day 89, after travelling around the UK and Wales and attending an annual rally with over 1 000 other Rolls Royces.