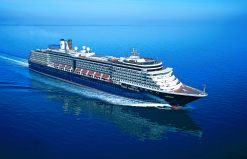 The 2010 Fifa World Cup will see some visitors flying to South Africa, some driving in, and others sailing in, courtesy of a deal between two travel companies in Germany and South Africa.

iKapa & Travel in Cape Town and Munich-based Moltke Promotion GmbH have teamed up to bring two luxury cruise liners to the port cities of Cape Town, Port Elizabeth and Durban during the football spectacular.

The magnificent MS Noordam and MS Westerdam will grace South Africa’s major ports for the full month of the 2010 World Cup, which kicks off on 11 June.

Both are ships of the Holland America Line, which has regular routes to all continents except Africa.

Registered in Rotterdam, both are also relatively new to the water – the Westerdam was christened in April 2004 and the Noordam in February 2006.

With 1 617 crew between them and a passenger capacity of 1 918 and 1 916 respectively, the Noordam and Westerdam is expecting to bring between 15 000 and 20 000 football-mad travellers to experience not only the South African passion for the Beautiful Game, but the vibrant culture and traditions of the country.

Although there is only one passenger terminal, in Durban, and the others are cargo ports, promotion manager One Ocean Club, a Moltke subsidiary, has booked convenient locations in Port Elizabeth and Cape Town harbours, and will convert these areas into temporary passenger zones.

A number of day and half-day excursions have been planned to suit every cruise passenger’s taste.

In Cape Town, half-day options include visits to Table Mountain and the city, Table Mountain and the Kirstenbosch botanical garden, a cultural tour, or a tour of the townships. Full-day choices range from trips around the breathtaking Cape peninsula, to the winelands, up the west coast, or to Hermanus on the south coast.

While in Durban, passengers can take half a day to visit uShaka Marine World, the , the Indian market, or the surrounding townships. The more energetic can indulge in full-day trips to the Valley of 1 000 Hills, the Midlands, Cultural Village, or game reserves in the area.

In Port Elizabeth the options extend to half-day tours of the city or townships, as well as museums and art galleries, or the nearby Kragga Kamma game reserve. Full-day trips further afield include deep sea fishing, the or Forest, and a private game reserve.

For those who can’t bear to be away from the greens for too long, One Ocean Club will arrange bookings at upmarket golf courses in the three cities.

One Ocean Club is no stranger to the floating hotel concept.

During the 2004 summer Olympics in Athens it organised a similar package with the official German ship AIDAaura. The company has promised visitors to South Africa an even better experience, as it now brings its expertise to the biggest football tournament in the world.

One Ocean Club has promised to make extensive use of local resources such as security and technical services, while using iKapa as the official transportation and excursion partner. It will also source fresh food supplies exclusively from local producers, and will stock world-renowned South African wines.

The company is offering a variety of packages, ranging from between two and four nights and one group match, or five nights and a semi-final game, to two nights and the final.

The semi-finals will take place at Green Point stadium in Cape Town and Moses Mabhida stadium in Durban. Johannesburg’s spectacular hosts the final, while the matches to decide third and fourth place take place at the Nelson Mandela stadium in Port Elizabeth.