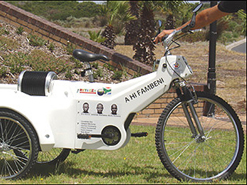 South Africa’s rural communities may soon have access to a new, greener form of transport, following the recent launch of the country’s first hydrogen-powered bicycle.

Minister of Science and Technology Naledi Pandor unveiled the vehicle at a technology conference earlier in August 2010 at the Kwa-Maritane Bush Lodge in the North West province.

The name of the bicycle is A hi fambeni, which is Xitsonga for “let’s go”.

“A hi fambeni offers a practical way to promote public awareness of hydrogen as a clean energy alternative,” Pandor said at the launch.

The bicycle was developed by students of the Tshwane University of Technology in partnership with the Department of Science and Technology and Hydrogen SA, which was set up by the South African government in 2008 to investigate the use of hydrogen as a sustainable and clean source of energy.

The team mentor was internationally renowned motorcycle designer Pierre Terblanche, who was sponsored by the department to work at the university for a month during the design process.

The South African-born Terblanche has been based in Italy for the past 20 years as a designer and consultant for prominent bike manufacturers Ducati and Piaggio, among others, and has scooped three prizes over the years at the Milan Motorcycle Show.

Terblanche became involved in A hi fambeni through the Resource Driven Technology Concept Centre (RETECZA), which is a non-profit initiative between the department, the Tshwane university, the Georgia Institute for Technology in the US, a consortium of the world’s leading motor manufacturers and a group of South African companies.

RETECZA – set up to develop technology for cleaner, more sustainable energy and poverty alleviation – hosted the conference at which the hydrogen bicycle was launched.

Top local and international researchers delivered papers at the conference, which focused on how technology can improve the standard of living in rural communities. There were contributions from a variety of overseas experts, including individuals from Sweden, Germany and Italy.

‘E-bikes huge part of the future’

A hi fambeni is not a conventional bicycle that needs vast amounts of pedalling: it’s powered by electricity that comes from hydrogen fuel cells, which are generally quiet and reliable units as they have no moving parts. Although there are other types of electric bicycles in South Africa, these are powered by lead batteries, not fuel cells.

Electric bikes, or e-bikes for short, are a huge part of the future of the green transport sector, Pandor said at the launch, adding that she was pleased the innovation was based on the bicycle, which is an affordable mode of transport.

“In many ways, the future of e-bikes can be seen in what has happened over the last decade in China, where the growth in the number of electric bikes has been spectacular. In 1998 there were a mere 400 000 there, but in 2008 there were 21-million,” the minister said.

In 2007 the science and technology department launched Shova Kalula, which means “push easily” in isiZulu. This is a partnership with the private sector and civil society that plans to give 1-million bicycles to school children by 2015 and to build dedicated bicycle paths across the country.

Pandor said she hopes there will be some synergy between Shova Kalula and the A hi fambeni prototype.

She added that the plan is to start with an environment-friendly bike, a trike and then a car.