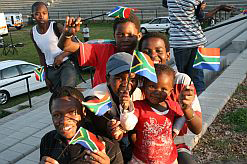 With South Africa counting down the days to the 2010 Fifa World Cup, a sports day recently held in Johannesburg’s Alexandra township kicked off a campaign to spread both excitement and lifeskills among the country’s young people.

On 23 November more than 80 youngsters, ranging from four to 14 years old, gathered for a football workshop with a difference at the township’s Football for Hope Centre.

They were there to pick up tips on how to “bend it like David Beckham”, as well as learn about national pride and the values of “ubuntu” – a Southern African philosophy of fellowship and community. It was also an opportunity to celebrate the 200 days remaining until the tournament begins.

The event was a joint initiative of Play Soccer South Africa (PSSA), the local arm of a US-based NGO, which gives life skills and football training to children from disadvantaged areas; the International Marketing Council (IMC); and Heartlines, which promotes good values in society.

“This is a contribution made by the three organisations to say that children deserve to celebrate. It’s about introducing them to the 2010 hype,” said Kenny Hlabahlaba, PSSA’s programme manager.

“It’s 28 Fridays to go,” Heartlines’ Mzamo Moloi told participants. “We’re here to play football with you, but at the same time we’re here to teach you love and respect.”

They were each handed plastic vuvuzela trumpets and South African flags, after Moloi taught the crowd about the significance of its colours. “The white represents the racial diversity of South Africa,” he said.

“The whole point is to partner with Play Soccer to use soccer as a means to instill values in the children. It’s about using soccer as a tool for social change.

“South Africans should grab opportunities presented by the current excitement about the much-anticipated tournament to create a strong spirit of doing good for their communities.”

It would be unrealistic to do this just for the month of the World Cup, he said. “We’re saying let’s build a movement to work for our communities even after the final, because life will go on.”

PSSA is well established in Alexandra and hosts scores of children at the Football for Hope Centre every Monday. “We use football to teach them about HIV and Aids. Children should know about such things. They also learn their rights and responsibilities,” said Hlabahlaba.

The organisation does the same kind of work in seven other areas in Gauteng, including the communities of Lawley and Fine Town, south of Johannesburg.

Play Soccer’s clinics have helped 18-year-old Sello Mahlangu, an Alex youngster appointed to train the children, adopt a healthier lifestyle. “It takes us away from many bad things. Play Soccer has done a lot for Alex … we learn a lot and we play soccer,” he said.

“It’s all about developing talents and unleashing the potential of the individual,” Hlabahlaba said.

Drumming up support for Bafana

The timing of this initiative is perfect, as it’s preparing all South Africans to welcome the world in 2010, said IMC chief financial officer Moeletsi Mabuku. “The best we can do is welcome the people with the spirit of ubuntu, the spirit of humanity.”

The IMC is also behind two other campaigns to drum up support for the World Cup and national football squad, Bafana Bafana.

Replicas of the national flag have been handed out to communities across the country through the Fly the Flag for Football drive, which was launched in April. “[The campaign] is powerful and it’s growing. People want the flag. They’re flying it from their cars and everywhere,” said Loyiso Stofile, the IMC’s marketing services coordinator.

South Africans are also being encouraged to wear football shirts to work at the end of each week as part of the Football Fridays concept to build spirit for next year’s tournament. “Companies are coming through and supporting it,” he added.

“That people can wear the gear of any team, be it Moroka Swallows, Brazil or Russia’s Rubin Kazan, is quite relevant to the World Cup. We have people coming here and we have to show that we are a supportive nation,” said Stofile.

“And as for Bafana Bafana, it really does need the nation to rally behind it,” Mabuku said. He believes the two campaigns will do a lot to inspire the team to do its best in 2010.

“The only way we can support our squad is by wearing their jersey and flying the South African flag with pride,” said Mabuku. “As we consolidate our support, we hope the coach and the players can tap into that.”

The IMC is supporting most “events that are milestones towards 2010”, he said.

At the Alex workshop I asked nine-year-old Lebogang Molapo about his opinion of Bafana Bafana. “Bafana Bafana will win it [the World Cup],” he said proudly. “Will we beat Brazil with its champion player Kaka?” I challenged. The youngster was in no doubt as he replied: “Yes, because Bafana Bafana has Teko Modise and Siphiwe Tshabala.”