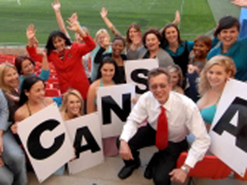 When the women of Port Elizabeth in the Eastern Cape get down to the bare essentials in an eye-catching Guinness World Record attempt on 23 October, they will be showing not only oodles of flesh but also a collective spirit of caring.

The Nashua Largest Ever Bikini Photo Shoot world record attempt will be raising money for the Cancer Association of South Africa (Cansa) and the organisers are hoping that at least 2 000 women will turn up and strip down for this very worthy cause, in what will be the city’s highlight of National Breast Cancer Awareness Month.

The current bikini photo shoot world record of 1 923 participants was set in the Russian seaside resort of Sochi in July 2008.

The title sponsor of this year’s South African attempt, office automation company Nashua, is already well known for its celebration of feminine figures, through its sponsorship of Sports Illustrated magazine’s swimwear edition.

When approached by organisers Club 100 for Ladies, Nashua Port Elizabeth MD Peter Hearne did not hesitate to pledge his company’s support to the event.

“Everyone has probably had some sort of personal experience with the scourge of cancer, and I’m no exception,” he says.

His sentiment is borne out by Cansa statistics showing that one in four South Africans is likely to be affected by the illness at some stage in their lives. Cansa is a national organisation with seven provincial and more than 30 regional offices. In operation since 1931, it ranks among the world’s largest volunteer organisations.

The fundraising initiative has also received the support of local telecommunications company Nashua Mobile, which has provided smartphones to allow the organisers of the fun event to get their serious message across.

“Cancer touches just about everybody in South Africa at some point in their lives,” says Nashua Mobile’s general manager Edwin Fichardt. “But with the country facing so many social challenges, like HIV/Aids, poverty, hunger and lack of education – all of which deserve attention and awareness – it is easy for the disease to slip under the radar, hence the importance of initiatives such as this.”

Cansa will be the sole beneficiary of the world record attempt which, although held in Breast Cancer Awareness Month, will benefit the fight against all types of cancer, as funds generated will support life-saving services like early detection, awareness-raising and patient care.

The exposure gained from the event will also be invaluable in helping to keep the cause of combating cancer firmly in the spotlight, says Cansa regional project facilitator Joan Duarte. According to Duarte, there are 10-million new cancer cases worldwide each year, and 22-million people are living with the disease.

She hopes many cancer survivors and their families will take part in the photo shoot. “It is so important for cancer survivors to get involved,” she says. “It gives patients hope if they see there are survivors out there.”

This is also the view of the event’s official photographer Liezel Barrow. “I think it would be great if women who have had cancer would come forward and participate,” she says. “It would also be fantastic if younger girls got involved (with parental permission for under-18s) – it is important for them to be aware of cancer and of the need to get themselves checked.”

Like Hearne, Barrow has a personal interest in the awareness-raising fundraiser. Her decision to approach the organisers to offer her services and support was more than just professional, it was also deeply personal. She was motivated to get involved by the loss of a close friend to breast cancer at the tragically young age of 25, and by her own brush with cervical cancer.

As a woman, she is less likely to be distracted by her scantily-clad subjects than her male counterparts would be. “But this is not about being sexy,” she says. “It’s about supporting a good cause.”

And the organisers emphasise that all women – not only the young, fit and firm but of all ages, shapes and sizes – are urged to participate in this celebration of the female form for a worthy cause. Those who feel shy – or cold, should Port Elizabeth live up to its Windy City sobriquet on the day – may cover up with a sarong.

Supporting a good cause

While not able to take part in the record attempt, which is for women only, the province’s rugby franchise, the EP Kings, have also come out in strong support of the initiative, which will be held at their homeground, Port Elizabeth’s magnificent new Nelson Mandela Bay Stadium.

The multibillion-rand stadium was built for the 2010 Fifa World Cup games hosted by the city, and was the first of South Africa’s five specially built new soccer stadiums to be completed.

The burly rugby players have showed their softer side by playing all their October matches in pink jerseys in support of National Breast Cancer Awareness Month.

“Cancer affects a lot of people,” says EP Rugby public relations and marketing officer Sakhi Gqeba. “We think there is a great ethos behind this world record attempt. It’s a fun way for people to gain awareness of the disease. We want to ensure the community plays its part in the fight against cancer.”

Putting PE on the map

And by doing so, the people of Port Elizabeth will also support their city. “A novelty event like this will always attract attention to a destination,” says local tourism expert and consultant Peter Myles. “Like all growing cities, Nelson Mandela Bay needs to project a positive image and high profile. This is what attracts investors.

“A bikini shoot is good for promoting our magnificent beaches – and beaches attract more tourists than any other destination attraction.”

Port Elizabeth, on South Africa’s east coast, is well known for its beautiful beaches, some of which have earned prestigious Blue Flag status. They are characterised by the warm waters of the Indian Ocean and often-vast expanses of clean white sand, making for a perfect combination of swimming and strolling. Factor in the wind for which the Friendly City is also known and sailing is added to that equation.

To find out more about taking part in the Nashua Largest Ever Bikini Photo Shoot world record attempt, visit the website (4cansa.yolasite.com), contact Laurence Finn on +27 84 507 3175 or e-mail club100@axxess.co.za.