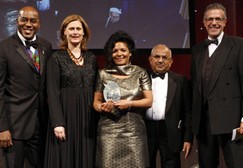 Author and community development strategist June Bam-Hutchison’s achievements, in spite of living and struggling through the apartheid education system, have finally been recognised on the world stage.

Bam-Hutchison was a leading anti-apartheid activist on the Cape Flats and a teacher during the Soweto uprisings.

In the same week that she received her award in London, the UN Educational, Scientific and Cultural Organisation (Unesco) awarded its 2008 Prize for Peace Education to South Africa’s Institute for Justice and Reconciliation, for a project managed by Bam-Hutchison until 2005.

The project, Turning Points in History, saw the publication of the first new South African history book for secondary schools since 1994.

“It was a thrilling week of achievement and work recognition for me, as I have studied and specialised in history education for probably 20 years or more,” Bam-Hutchison said.

The GG2 Leadership and Diversity Awards showcase achievements by members of minority groups, attracting a diverse and powerful audience of high achievers.

“It felt like a night at the Oscars, with over 800 people including celebrities applauding me in one of the world’s most powerful capitals,” Bam-Hutchison said after the awards ceremony.

Celebrity chef Ainsley Harriott presented Bam-Hutchison to Britain’s First Lady and the audience. “He then led me off the stage and walked with me to take me to the television team for a backstage interview. He told me how honoured and pleased he was to have met me.

“I did not consider myself a celebrity like that. Come on, this is Ainsley Harriott!”

Bam-Hutchison describes her most memorable moment as the day she met Nelson Mandela, more than 10 years ago.

“He stood up tall and dignified and bent over to greet me and to thank me for my role in fighting apartheid,” she recalled. “His hand was huge and warm. I’ll never forget that moment of silent respect and recognition, and the warm twinkle in his eyes and smile.”