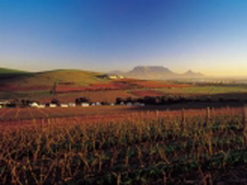 Many of South Africa’s most successful wines are grown and produced in the Durbanville valley.
(Image: MediaClubsouthafrica.com)

South African wines have performed impressively of late at numerous prestigious international wine awards. Against strong competition from overseas, the local wine industry has proved yet again that wine is one of South Africa’s most successful exports.

“South African wines are able to compete with any other wine producing region in the world,” he says.

Wines from estates in the Western Cape’s Durbanville Wine Valley claimed top honours at the Michelangelo International Wine Awards. This competition started in 1997 and although it’s a home-grown event, is distinctive in the industry as all the judges but one are international.

The aim of the competition is to find South Africa’s best wines that will also be well accepted in the international market, and, say the Michelangelo organisers, any local wine that’s been commended by 15 international wine experts should have no problem in overseas markets.

Diemersdal winemaker Thys Louw says the accolade shows that their wines are well up to international standards. He commended the entire Diemersdal vineyard and cellar team, including his father Tienie and co-winemaker Mari van der Merwe for their success.

“We can produce such good wines because we put a lot of effort into making them,” Van der Merwe says.

The geographical location of the Durbanville area is another major advantage for winemakers and the area is known to produce top Sauvignon Blanc wines. It is close to the Atlantic Ocean, the soil is very fertile, and the climate is ideal. Annual rainfall of about 700 mm also affords good soil moisture for grape cultivation.

The Louw family, who have owned the Diemersdal estate for six generations, also attribute their success to minimal cellar intervention. This approach conserves the “prominent varietal character” in their wines.

Other member farms of the Durbanville Wine Valley also walked off with top awards. Altydgedacht won the Sue van Wyk Pinotage Trophy and a Grand D’Or (double gold) for Altydgedacht Pinotage 2009. This estate is one of the oldest in the country.

Durbanville Wine Valley Association chairman Righard Theron agrees that the Durbanville area’s viticulture terroir (the sensory attributes of wine in relation to the environmental conditions where grapes grow) contributes significantly to the area’s winemaking success. The altitude of the surrounding hills brings both cooler and warmer weather and this makes it possible for farmers to produce different varieties. It is also possible to produce different styles of wine from the same variety.

Nederburg’s 2005 Private Bin Edelkeur received the trophy for top dessert wine in the 2010 Tri Nations Wine Challenge which, like its rugby counterpart, was contested between South Africa, Australia and New Zealand.

This accolade is a big honour for South Africa, as it proves that local wines are being noticed. Wines in this competition are submitted by invitation only.

In a statement, cellar master Razvan Macici says the 2005 Edelkeur has a luminous golden colour and a fragrant blend of peach, apricot, honey and spice. “Its honey-type sweetness contrasts with a lively, refreshing acidity to give it a pleasingly harmonious balance.”

Current Nederburg winemaker Tariro Masayiti says this dessert wine should be celebrated, as it is part of South Africa’s wine heritage and was first produced by the estate’s legendary Günter Brözel, who was appointed as winemaker in 1956. The wine was released at the inaugural Nederburg Auction of Rare Cape wines in 1975, and today is still only sold through the auction.

Nederburg’s international brand representative Lynette Harris has been quoted as saying that the award affirms the producer’s status as a top producer of dessert wines. “The winery consistently outperforms its competitors on international and domestic shows,” she says.

Anthonij Rupert Wines did the nation proud by being the only South African gold medal winner in the”‘other red varieties” category with its Anthonij Rupert Cabernet Franc 2006. This range is produced at the L’Ormarins estate where the team attributes their winemaking success to selection of the best fruit, and cellar production techniques such as the gravity feed process.

In a gravity flow winery, neither the grapes nor wine are moved by pumps. Instead, grapes fall naturally into the fermenting tanks, and wine then moves from the fermenters to the aging barrels. The winery setup usually consists of multiple levels, making it possible to use gravity to move the grapes and wine through processing.

SA Wines Online, an online retailer that sells South African wines in the UK, was honoured by the Decanter World Wine Awards with its Specialist Merchant of the Year accolade. In this category, the judges assess wine merchants on criteria such as quality, value, range, innovation and customer service.

It is one thing to produce good wines, but for the wine industry to grow, more people have to become familiar with wine, and buy it. SA Wines Online took top honours in this category for designing their website to be accessible to consumers, and offering expert advice on the South African wine industry.

Kevin Gallagher, MD of SA Wines Online, says although the company is virtually unknown to the average South African consumer, it has grown so much that wineries are approaching them to sell their wines in the UK.

“This is another reason why we have the biggest selection of South African wines on offer to the UK and the European customer,” he says. The company stocks more than 1 000 wines from 135 wineries, and sells the largest range of South African wine in the UK. Fully 80% of its customer base is British.

At the awards ceremony Gallagher said that it is encouraging that so many South African wines are available to UK consumers. “Local wines are becoming serious contenders on the world wine scene,” he said.

The South African wine industry has proven to be progressive in discerning what local and international wine consumers want.

Van der Merwe thinks that South Africa’s wines are so exceptional because there are many new winemakers entering the industry. “They are keen to experiment and take the time to investigate what makes a good wine,” she says.

Gallagher says that the South African wine industry made a remarkable comeback when it re-entered the international wine scene in the early 1990s. Many winemakers realised that they had fallen behind the rest of the world, but they were quick to travel and study winemaking methods of other wine producing regions. New grape varieties were also introduced.

“Even now, young winemakers are still travelling to other wine producing regions, partaking in the harvests and seeing alternative techniques and methods of wine producing,” he says.

South Africa is one of the few wine producing regions that enjoys copious sunlight throughout the year, and this is particularly favourable for growing grapes.  “South Africa’s wines are found to have a high flavour and varietal expression and our climate allows for this,” says Masayiti

He says there is also no shortage of good quality, easy-to-drink wine to enjoy with a meal, or simply on its own. The market for wine is changing, and more people are expressing an interest in tasting wine and drinking something that they like.

South African wines are also becoming more popular in other international markets and the African region. Gallagher says the UK is the biggest export destination for South African wines and large quantities are shipped to the rest of Europe.  Alternative destinations such as the rest of Africa, the Far East, and North America are becoming increasingly important to the industry. South Africa is also the biggest supplier of wines to Sweden.

“A large number of wine experts foresee China and Japan to be the next great market in terms of growth potential for the international wine industry,” he says.