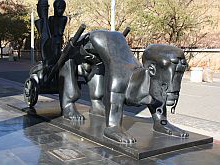 Soweto vendors are hard at work, making craft to send overseas to tourists who came for the World Cup and loved their work.
(Image: Makoena Pabale)

It’s been six months since the final game of the 2010 Fifa World Cup was played in South Africa and the last of the foreign tourists returned home, but small vendors in this country say they are still reaping the benefits.

South African street traders say that brushing up on different languages ahead of the tournament was really worth it – and they’re still getting craft orders from overseas fans.

Thulani Mabhena is a vendor outside the Hector Peterson Museum in Orlando West, Soweto – South Africa’s biggest township. He picked up some French so that he’d be able to converse with World Cup tourists who visited the museum and expressed interest in buying some of his handmade crafts.

A hot spot for tourists in general, the museum on Khumalo Street commemorates the 1976 Soweto Uprising and is named after the first pupil who was killed in the protest.

Mabhena said it was a happy time for both the tourists and for his business. “We got to exchange cultures. With my conversational French I was able to sit with some of the tourists and chat about life and the amazing experience of the World Cup. We talked about our favourite teams and players, and I taught them how to play the legendary vuvuzela.”

He said tourists felt safe in the township and spent time before and after games enjoying the culture, food and drinks at local spots close to where he worked. “It was amazing how free everyone was. I taught some of the visitors how to sing and dance South African style, it was a lot of fun. The best part was making sales … many of the tourists thought my stuff was magnifique (magnificent, in French) and bon marché (cheap, in French).”

Mabhena said he is still hard at work keeping up with a number of orders for “local treasures” – such as calabashes and animal sculptures – which foreigners want packaged and sent back to them as a reminder of their time in Africa.

A recipe for success

During the 2010 tournament Ntabiseng Molefe and Lufuno Mgomane were based a few kilometres from Soccer City, which hosted the opening and closing matches. They learned Portuguese so they could chat to fans supporting their food business. “We sold plates and plates of pap and tripe, a local delicacy,” said Molefe.

“Business is a bit slow now because there isn’t the same flow of people coming to the stadium, however, we have used the money we made during that time to pay for baking and cooking classes so we can open a small shop and sell food,” said Mgomane.

She said many World Cup tourists asked them to write out the recipes and ingredients of the food they sold, so the fans could make the dishes back home. “Many were willing to pay for the recipes, but we were happy to give it to them for free. A lot of them insisted so, well, we were not going to refuse money.”

“I made a killing on vuvuzelas,” said Siphamandla Njilo. “ I was just travelling around fan parks and along stadium routes all over Gauteng with vuvuzelas and flags. Within two hours I would be rushing back home to get more vuvuzelas and make more orders because tourists loved them so much and snapped them up within minutes.”

Njilo said he couldn’t believe how popular the loud plastic horns were. “It was crazy … everyone wanted to blow one, it was all you could hear from any part of South Africa. It may have irritated some, but it excited me because I made major money from it.”

As with the other vendors, Njilo said he is still enjoying the financial benefits of the World Cup. “Ive put my money away and want to go to school to learn how to make crafts that celebrate football and African culture. I could send these overseas to be sold there. I think I’ll do well, I saw how many foreign visitors loved African craft and I want to break into that market.”