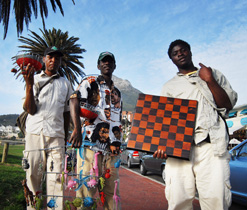 Informal traders such as these are
gearing up to take advantage of the
business opportunities offered by the 2010
Fifa World Cup.
(Image: Jeffrey Barbee,
MediaClubSouthAfrica.com. For more free
photos, visit the image library.)

Informal traders are learning foreign languages in preparation for the thousands of visitors from all over the world expected during this year’s Fifa spectacular.

Thulani Mabhena arrives early to secure his spot and start laying out his merchandise outside the Hector Peterson Museum, in Orlando West, Soweto South Africa’s biggest township. “Bonjour ma soeur [Hello my sister],” he says to a lady passing by rushing to catch a taxi to work. “Bonjour Thulas [Hello Thulas],” said the woman. “Comment allez-vous ma soeur? [How are you my sister?],” replies Mabena with a bright smile.

Mabhena, or Thulas as he is affectionately known, has been practising French for the past four weeks. “I’m getting really good at the language now. By the time the foreign visitors arrive here for the World Cup in June I’ll be brilliant. This will make them feel welcome, and hopefully they will purchase a few items amidst all the excitement,” he said.

Thulas uses a French book he got from a friend to learn French. He focuses on learning basic phrases, such as greetings, and simple terms to explain and negotiate prices and make sales. “I mainly started learning French because I realise how popular Soweto is, particularly this historical area. Many tourists come here all year round. I suspect during the World Cup there will be even more tours to this area.”

The museum is on Khumalo Street and is a commemoration of the 16 June 1976 Soweto Uprising. Thousands of students took to the streets to protest against being taught in Afrikaans at schools, as dictated by the Afrikaans medium decree. Hector Peterson was one of the hundreds of children who were killed when police responded to the protestors with teargas and live bullets.

The historic museum is a short distance from where police opened fire on students. It takes visitors on a journey through the build-up to the youth rebellion, the events of the day and its tragic end result.

Tourists visit Soweto all year round, taking tours to historic sites such as the Hector Peterson Museum. This makes it a hot spot for vendors selling South African arts and crafts, and other memorabilia.

“I’m not the only person selling here as you can see. I want to put myself a step ahead of the pack. The other vendors here can’t speak French. Who do you think the tourist will want to buy from – the guy speaking a language they can’t understand, or the one that speaks their language?”

Serving SA on a hot plate

About 10 Kilometres east of the museum lies Soccer City the largest stadium in Africa and the flagship venue for the Soccer World Cup 2010. The stadium can seat 80 000 people and will be hosting both the opening match and the final.

Ntabiseng Molefe is cooking up a storm with her friend Lufuno Mgomane. They dance and sing along to traditional Mozambican music coming from a small CD player. “Bom dia Senhor [Good morning Sir],” they say in unison as a gentlemen approaches them to enquire about the price for one plate of food. The gentlemen speaks to them in Portuguese and they reply in Portuguese, checking their notebooks every now and then to make sure they get each phrase right.

They make a successful sale and break into uncontrollable laughter from excitement as the man walks off with his plate of steamy tripe and pap (Afrikaans for stiff porridge) singing and bopping his head to the sounds of the Mozambican music in the background. “We did it amigo [friend],” said Molefe.

Mgomane and Molefe have been learning Portuguese from their neighbours and construction workers working in the area who come from Mozambique. “We sell food here which is just a few kilometres from the stadium. Tourists will pass us here on the way to the stadium. They will smell our lovely South African food and want to taste it. Then we will charm them with our Portuguese. We’ll be selling endless plates.”

The two ladies say they chose Portuguese because they believe it’s more universal in ‘football world.’ “The Brazilians are the most popular team and the Spanish team and they can both speak and understand it. Many African countries speak it too. In football world I think most people can speak or understand some Portuguese,” said Mgomane.

Molefe says they are keen to be part of the big event and want to interact with the tourists, football fans and players. By learning the language, they believe they are giving themselves a good chance in business and in enjoying this once in a lifetime experience. “I’m sure the players will also drive past here touring or on the way to the stadium for games. They will hear the music and us speaking their language. I’m sure they will give us their autographs and say hello,” she said.

“Tourists might also get lost on the way to the stadium and they always ask the people on the streets for directions. Imagine how welcome and safe they will feel when we respond to them in their own language. The music helps to create a vibe too and draw people’s attention. It will make tourists stop and dance for a while, the smell will catch them, and we will make big sales. ”

Mgomane agrees. “We are determined to sell this country of ours. With every sale we make we will serve South Africa to the tourists. They will remember the warmth of the pap, and the people of this country.”

The Durban police station has set up classrooms where vendors can learn French. A young woman who recently finished her French degree has been giving classes to vendors who work along the beachfront where most of the city’s top hotels are located.

The classes have been going on for the past two months, and take place three times a week.

Durban will host seven World Cup matches and expects 100 000 visitors during the tournament. The city wants to ensure that vendors benefit from the influx of visitors.

The vendors will not be allowed in areas managed by Fifa, including the stadiums, where only official World Cup partners such as Coca-cola and Budweiser are allowed to sell their products.

To insure the traders are still able to benefit from the event, three new markets are being built to house 500 stalls along the beachfront.

“It is important for them to know other languages in order to interact with their customers clearly during the World Cup,” she said.

Though many vendors in South Africa have little education, some battling to speak English one of the country’s official languages. They are enthusiastic about learning a new language, hoping it can boost their growth and their small business.