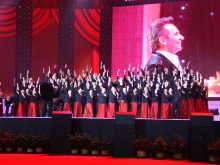 The choir of Stellenbosch University took part in the World Choir Games in Shaoxing, China, in July, and walked off with a world title in two categories.

Thousands of entrants gathered in the town in the eastern coastal province of Zhejiang for the sixth edition of the biennial competition, which ran from 15 to 26 July 2010. The World Choir Games is regarded as the largest event of its kind.

Over 6 000 choristers in some 470 teams from 83 countries made the long journey to China, among them three South African choirs – the Kearsney College Choir, the Tygerberg Children’s Choir, and the Stellenbosch University (SU) Choir.

The SU Choir took gold in both its categories – Mixed Choirs category as well as Musica Contemporanea (contemporary music). In the former category the vocalists battled it out with 28 other choirs, and their second category saw them triumph over 10 rivals.

Choir conductor Andre van der Merwe said afterwards: “The SU Choir received the highest overall mark of 95.8%. I am extremely proud of the discipline, passion and dedication of the 112 choir members!”

Van der Merwe added that the choir received good television, radio and print exposure, and were thrilled to be ambassadors for their country. They also took part in the champions’ concert.

This is not the first time the SU Choir has walked off with top honours at a World Choir Games event – the ensemble took a gold medal in the Musica Sacra category at the previous competition held in Graz, Austria, in 2008, as well as a silver medal for Gospel and Spiritual.

The Tygerberg Children’s Choir, performing under the baton of Hendrik Loock, also returned triumphant with gold medals in the Folklore and Music of the Religions categories.

The SU Choir is one of several ensembles in the university’s Department of Music, along with the SU Symphony Orchestra, the Kemus electronic music ensemble, the Schola Cantorum chamber choir and the Symphonic Winds.

The oldest university choir in the country, it was founded in 1936 by William Morris, who was also its first choirmaster. Van der Merwe, who took up his post in 2003, is its seventh choirmaster.

Besides its live performances, the award-winning choir has released a number of albums.

The World Choir Games are open to amateur choirs from any country and continent, irrespective of the genres represented in a choir’s repertoire. But participation is by invitation only.

The singing festival is organised by German foundation Interkultur, which exists solely to bring people from all cultures together in music and song.

The inaugural competition took place in Austria in 2000.

“To experience this festival for choirs from all over the world means to participate, to contribute one’s own performance, to compare to others and to experience the enthusiasm of singing together,” said a statement on the Interkultur website.

This year the biggest contingent came from Russia, which entered 31 choirs.