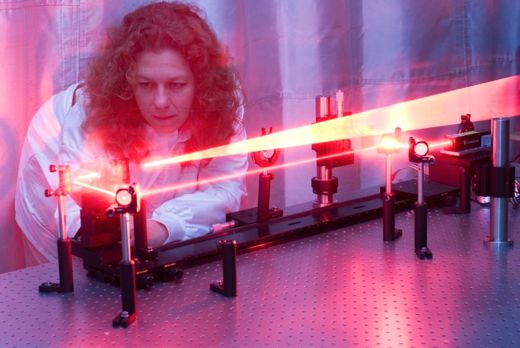 The CSIR’s Liesl Burger was part of a small team of four involved in developing the world’s first digital laser. Photo: CSIR 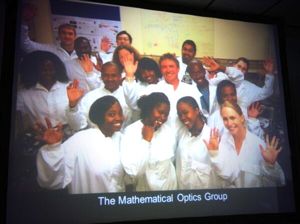 @ProudlySA tweeted this photo of the CSIR’s Mathematical Optics team at the conference to announce SA’s digital laser breakthrough. Photo: ProudlySAWhile the number of girls and women studying science and engineering steadily increases each year, they are much less likely to choose careers in these fields than men.

It’s frustrating – but not nearly as maddening as the fact that women are still discriminated against in the fields of science, technology, engineering and maths (STEM). Often earning less than their male collegauges, they come up against gender stereotyping and resistance from their  employers or even their families simply because they’re in a field traditionally dominated by men.

But developments in South Africa this week have given us yet another role model to inspire our girl children: Liesl Burger was one of the team of four scientists at the The Council for Scientific and Industrial Research (CSIR) who developed the world’s first digital laser.

Scientists at the CSIR say they have created a means of controlling a laser beam’s shape digitally. This “disruptive technology” has enormous implications for health care, manufacturing, communications and other industries.

The CSRI team, which is part of the National Laser Centre’s mathematical optics group, is headed by chief scientist Andrew Forbes. Burger worked with Sandile Ngcobo, the PhD student on the team who realised it was possible to digitally manipulate a laser beam from inside the laser, and Dr Igor Litvin.

According to information on Research Gate, Burger has been a researcher at the CSIR since January 1989. She has an MSc in Laser Physics, and has published 14 papers. Burger and Litvin’s work was featured on the cover of the South African Journal of Science in 2008.

Looking at the photograph tweeted by @ProudlySA at the CSIR media briefing on Tuesday, it’s inspiring to see how many female members are part of the mathematical optics group.

In fact, Prof Forbes says there are 10 female students or staff in his unit at the moment. “I have checked and at any given time my group has been approximately 60% female. I think this is pretty good given that we work in hard-core physics!”

Work on the digital laser grew out of a CSIR research project from three years ago, according to Prof Forbes. “That’s the nature of science — you invest for a short time but may only see the outcome years later.”