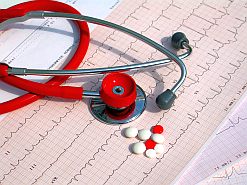 Carriers of the progressive familial heart
block gene can now get a timely diagnosis
and treatment. (Image: stock.xchng)

Researchers from South Africa’s , working with international colleagues in a study spanning more than 30 years, have identified the rogue or defective gene that causes a type of hereditary heart disease.

Among the researchers are the father and son cardiac research team of Professors Andries and Paul Brink. They worked on the study with colleagues from the German universities of Hamburg and Münster.

The disease, known as progressive familial heart block (PFHB) type I, affects the electrical system of the heart, as opposed to diseases that affect the organ’s blood vessels. Coronary artery disease can cause a heart attack or angina, while heart block is responsible for palpitations, light-headedness and fainting.

PFHB can occur at any time in life and in a few cases has been diagnosed before birth. As the disease may progress to a complete heart block, successful management depends on the fitment of a pacemaker, but if it is not caught in time the patient may die.

The discovery is a breakthrough for South African medical science as it gives hope to sufferers, who can now get advance warning of their condition and seek the necessary treatment.

It will also help academic and medical staff to gain a better understanding of other conditions that affect the heart’s electrical system.

Acording to the Heart Foundation of South Africa, about 195 people die every day from some kind of heart or blood vessel disease.

The heart’s electrical impulses are generated by an internal natural pacemaker known as the sinoatrial node. The cells in this node send impulses out along a specialised conduction system, which tells the heart to beat.

Proper functioning of these cells is vital for efficient contraction and pumping of the blood. If the electrical signal is disrupted or slowed as it moves through the tissue, a heart block occurs. Artificial pacemakers fulfil this electrical duty if the built-in system is too severely damaged to function properly.

In PFHB type one the onset is early and the disease progresses rapidly. In type two the disease occurs later in life.

The rogue gene was found in three branches of an Afrikaans familial group that can trace its ancestry back to one Portuguese individual who landed on the shores of the Cape at the end of the 17th century.

During the 1970s Brink Sr, then a cardiac specialist at Cape Town’s Tygerberg hospital, treated an infant born with a slow heart rate, whose only hope of survival was an artificial pacemaker. According to Brink Jr, pacemakers in those days were large and unwieldy and to implant one into the body of a child was risky.

Brink Sr became aware of another young child that needed a pacemaker, and it happened that the two children were closely related. He realised the condition may run in the family, and with Torrington’s help he traced its occurrence to other families, located mainly in the Eastern Cape province.

It was Torrington who discovered that the disease was brought into South Africa by the Portuguese immigrant who arrived in South Africa in 1696. He subsequently married a woman of Dutch descent, and genetics has carried PFHB down all the generations since then. No matter where in the country they live, every South African suffering from PFHB today is descended from that couple.

In 1986 Brink’s son Paul, professor of internal medicine at Stellenbosch University’s medical school, and colleague Valerie Corfield, a molecular geneticist, began a study into the identification and location of the defective gene that causes the condition.

They identified 71 carriers in the three families, of whom 48 had pacemakers implanted. Not everyone born into the PFHB family line will automatically get the disease. Corfield said that about half will be carriers and of that number, about 66% will eventually need a pacemaker.

Eventually Brink and Corfield narrowed down the probable locus to an area encompassing about 80 genes on chromosome 19, which contains just over 1 500 genes. Genes on chromosome 19 have been linked to a number of conditions, including late-onset Alzheimer’s disease.

Around the same time Prof Olaf Pongs of Hamburg University’s Centre for Molecular Neurobiology was researching a link between gene TRPM4 on the 19th chromosome, and PFHB type I. The subjects of his study were all Afrikaans South Africans.

Pongs contacted the team, “serendipitously” according to the South African scientists, who were rather daunted by the task of having to examine in detail a possible 80 genes, which is a time-consuming and expensive process.

“Pongs told us that he was interested in a particular gene situated in our search area and that we should take a closer look at this gene,” said Brink.

The two research groups decided to join hands, which led to the discovery that the gene Pongs pointed out was indeed the one that, after undergoing a very small change, causes PFHB.

“Through our research it soon became clear that the product of this gene was playing a role in the way heart cells handle sodium and potassium,” explained Brink, “which underlie the electrical signals of the heart.”

Findings of this study, titled Impaired endocytosis of the ion channel TRPM4 is associated with human progressive familial heart block type I, have been published in the September 2009 issue of the Journal for Clinical Investigation, and may also be read online.