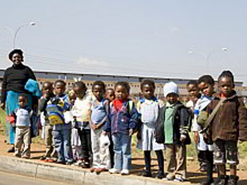 South Africans can currently expect a mean of 8.12 years of schooling.
(Image: MediaClubSouthAfrica.com)

South Africa is considered a medium development country and was ranked 110 out of 169 UN member states in the latest report, a marginal improvement from last year’s position of 129 out of 189.

The Human Development Index (HDI) is a composite statistic used to rank countries by level of human development. It separates developed, developing and underdeveloped countries in three broad areas covering life expectancy, education or access to knowledge, and income as an indicator of standard of living.

These indicators are complemented by separate indices for gender, inequality and multidimensional poverty

First published in 1990, the HDI celebrates its 20th anniversary in 2010. The previous 19 reports are all accessible from the UNDP website.

Analysts use complex equations to calculate values for each of the three categories, and the final HDI score is taken as the geometric mean of the three.

South Africa’s score places it amongst the top 10 countries on the continent. Other medium development countries include China, Botswana, India, Egypt and Thailand. The top nation is again Norway, while Zimbabwe remains at the bottom of the table.

However, said the UNDP, progress need not depend on massive spending. It named Ethiopia, Cambodia and Benin, which all made gains in education and public health rather than income, among the most improved countries of the past 20 years.

The complete report may be downloaded (PDF, 11MB) from the website of the UNDP.

“While Brand South Africa works to lift the profile of South Africa’s global competitiveness around the world, it is always mindful of the broader reputation drivers and the context these bring to a purely investment driven conversation by our stakeholders,” said Brand South Africa CEO Miller Matola.

Reports like the HDI are important in this light, said Matola, because they influence reputation as well as perceptions of future investment potential for South Africa in terms of a healthy and educated work force capable of high levels of productivity.

South Africa’s overall HDI score experienced gradual improvements between 1990 and 2005. Since 2005, its overall score has remained stable and continues to trend in line with the global average.

“South Africa ranks eighth out of the broader sub-Saharan region, behind countries like Botswana, Namibia and Gabon. However, South Africa performs well in the region when assessing the levels of multidimensional poverty, where it is scored the best,” said Matola.

Multidimensional poverty is a measure of serious deprivations in terms of health, education and living standard. It combines the number of deprived with the intensity of their deprivation. South Africa has 3% of its population living in some form of deprivational poverty relative to a country like Niger, which has 93%.

Among the four emerging markets that make up the Bric structure, South Africa performed ahead of India (ranked 119) and behind Brazil (73), Russia (65) and China (89).

“It is important to contextualise South Africa’s development alongside other emerging markets to ensure that not only our economic growth but our people dimensions are enhanced at a similar rate to other comparable nations,” said Matola.