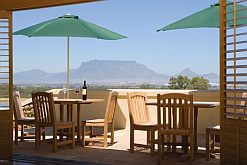 South Africa featured prominently at the recent World Travel Market in London, showcasing its diverse natural beauty and world-class facilities that will guarantee an unforgettable experience for visitors to the 2010 Fifa World Cup.

Some 135 exhibitors – ranging from tourism boards and safari companies, to the luxurious Rovos Rail and Blue Train – represented the country at the event, which ran from 9 to 12 November at the ExCel Centre.

As the world’s biggest travel trade show, it attracted nearly 5 200 exhibitors and more than 200 travel and media agencies from Asia, Europe and the Americas.

The South Africa Tourism stand, with UK country manager Lebohang Mokhesi at the helm, promoted each of the country’s nine host cities for the upcoming World Cup spectacular. Host city Polokwane, in Limpopo province, also had its own stand.

With a little under seven months to go, the long-awaited football tournament, second only to the summer Olympic Games in scope, was one of the main themes of the South African exhibit, which aimed to build excitement and anticipation ahead of the 11 June kick-off.

“In addition to some stunning, world-class football, visitors to South Africa can look forward to an unforgettable holiday in one of the world’s most culturally and geographically varied countries,” said Mokhesi.

The exhibition is a trade-only event and is not open to the public, but welcomes travel-related professionals such as journalists, hospitality providers and tour operators.

Various seminars, conferences and networking events provided opportunities to form business associations while staying up to date with the latest developments in the industry.

The 2009 theme was “Sports Tourism Takes Poll Position” and travel agents were encouraged to visit the South African exhibit to get fresh ideas for their 2010 tour packages.

The national pavilion featured a huge screen that enticed show-goers with sweeping scenes of wildlife and natural beauty. The 2010 mascot Zakumi, a spotted leopard with green hair, was there to welcome visitors to the stand.

Delegates were also treated to demonstrations of the energetic Diski Dance with its football-inspired moves and infectious rhythm.

Van der Merwe is also an alternate director on the Local Organising Committee (LOC) and attended the travel exhibition in this capacity.

The deputy minister spoke out strongly about South Africa’s readiness to host the world’s biggest football event, describing government’s extensive investment into infrastructure upgrades, safety and security and communication technology, as well as justice and accommodation.

She addressed issues such as the steps taken to ensure airport security and prevent illegal immigration during the World Cup, and the legacy that the tournament will leave, not just for residents of South Africa, but for all African people.

She also participated at a round table discussion hosted by the UK’s Financial Times.

Van der Merwe was accompanied by LOC CEO Danny Jordaan and football star Lucas Radebe. Radebe is a former Bafana Bafana captain, but is popular amongst Britons because of his highly successful five-year stint as captain of Leeds United. He recently accepted the post of 2010 ambassador for South Africa Tourism.

Jordaan and Radebe took part in the theme seminar, sharing the platform with Fifa’s executive director of competitions Jim Brown, and Mark Howell, who is Visit London’s 2012 director, among others.

Other South African representatives included Dawie de Villiers, former Springbok rugby captain and currently chair of the International Task Force for the Protection of Children in Tourism, speaking at the seminar on advances in travel philanthropy.

Many of South Africa’s biggest players in the tourism sector, as well as some smaller ones, were on show at the World Travel Market.

Many of the country’s most outstanding hotels were there to show off. They included Cathedral Peak in the Drakensberg mountains; the Twelve Apostles in Cape Town; the prestigious Relais et Châteaux group; the &Beyond group which operates lodges in several African countries as well as India; and the distinguished Oyster Box in Umhlanga, north of Durban.

Provincial tourism authorities and regional airline operators – including Air Namibia, British Airways and Comair, and South African Airways – were also on hand to round off a comprehensive presentation of everything South Africa has to offer.