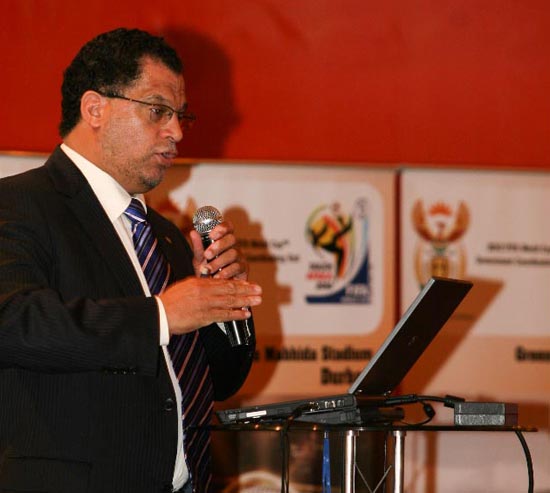 Discussion at the media briefing held in Beijing in August to report on the status of South Africa’s 2010 preparations.

A press conference held in Beijing on 21 August 2008 shed light on South Africa’s ongoing preparations for the 2010 Fifa World Cup – and the message to the world is that SA is on track to deliver the goods.

South Africa’s Local Organising Committee (LOC) held a press briefing in Beijing on 21 August 2008 to report on the status of the country’s preparations to host the Fifa World Cup in 2010. The delegation was led by South Africa’s Deputy Minister of Finance Jabu Moleketi, and LOC CEO Danny Jordaan.

Other members of the delegation included Minister in the Presidency of the Republic of South Africa Dr Essop Pahad, Fifa Secretary-General Jérôme Valcke, Commissioner Andre Pruis of the South African Police Services, and Ray Wheland of Zurich-based MATCH AG, the company tasked by Fifa to provide ticketing and hospitality services for major Fifa events such as the 2009 and 2013 Confederations Cup and the 2010 and 2014 World Cup tournaments. 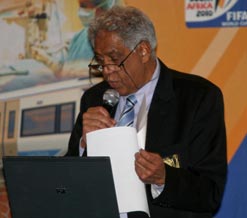 The briefing took the form of a panel discussion forum facilitated by Government Communication and Information Systems and the national Department of Sports and Recreation.

South Africa has taken full advantage of the media opportunities presented by the Beijing Olympics, which has attracted 5 600 accredited journalists and other media professionals from all over the world, said CEO of Government Communication and Information Systems and official government spokesperson Themba Maseko.

Speaking at the briefing, held at South Africa’s Ekhaya (isiZulu, home) Hospitality Centre in the Westin Chaoyang Hotel, Minister in the Presidency Pahad said that the 2010 World Cup must be used as a vehicle to project a whole new image of South Africa, and the African continent, to the world.

“For us this event is much more than sport,” said Pahad. “It is about South Africa’s and Africa’s ability to host the world. It is about getting out from underneath the welter of negative press coverage our continent receives. It is about informing the world that Africa has much to offer, that our people are ready to receive the world, ready to host those who come to the World Cup and that when they come they will receive a wonderfully unforgettable African experience.”

Ready to welcome the world

LOC CEO Danny Jordaan re-iterated South Africa’s readiness to hold an event of the magnitude of the World Cup, adding that construction is ahead of schedule in most cases. “In terms of our stadium construction programme, our deadline for the Confederations Cup venues is December 2008,” he said. “Those stadiums are there and they are being upgraded. In terms of stadium readiness, we can say here, that will be ready by the end of 2009. All the stadiums will be complete for kick off.

“For the rest of the stadiums, the completion date is October 2009. Eighty percent of those stadiums will be completed by July 2009.”

In a media briefing held on 13 August 2008 at the Union Buildings in Pretoria, Deputy Finance Minister Moleketi said that South Africa is meeting the timelines set in terms of development and construction. “We have covered a lot of ground. The timelines and the deadlines that we set ourselves have been met, and those are also in keeping in ensuring that we are indeed ready to host 2010.”

With regard to tourism, an extra three million tourists are expected to visit South Africa during the World Cup, boosting the number of tourists in a single year to 10-million. “We are there to give them an experience to ensure that they come back with their families and friends,” said Moloketi.

Tourism to South Africa currently contributes more than 8% to the country’s GDP, and is expected to leap to 12% in June and July 2010.

The entire Southern African region will gain from the World Cup in tourism terms, said Pahad. “Tourism SA is in the process of linking 2010 to a range of other tourism experiences throughout the country and the region. Travel throughout the region will as far as possible be relatively easy and seamless.”

The minister went on to mention the Univisa, which will allow visitors to travel to all countries in the Southern African Development Community region on one visa.

Jordaan also commented that the successful hosting of the World Cup will open the door to other prestigious events, and possibly even the Olympics which, too, has never taken place on African soil. “It is very important that we succeed in this world cup, because nothing less is required to open the door for the last major event on the continent the Olympics.”

Andre Pruis, the South African police commissioner, assured delegates that the World Cup will be a safe and secure event, saying most of the safety and security infrastructure is already in place.

In January 2008 China and South Africa celebrated a decade of international relations. Relations between the two countries did not take off in 1994 because of a dispute involving Taiwan, but on New Year’s Day 1998 bilateral relations were established and have developed smoothly ever since.

A report on the official Chinese government portal says that in 2000 the volume of bilateral trade reached $2-billion, at that time more than 20% of the total trade volume between China and the entire African continent. And by the end of 2006, the volume of Sino-South Africa trade had almost quintupled to $9.8-billion.

With the Beijing Olympics drawing to a close, the attention of the world will now shift to Africa. The 2010 World Cup, the first ever to take place on the African continent, is not only viewed as a South African event, but an African event that will boost the country’s and the continent’s standing in the global community. “Our destiny is linked to that of the rest of Africa,” said Pahad, “and we are working to build a better South Africa, a better Africa and a better world.”