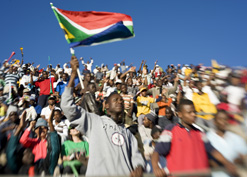 The findings from the fourth instalment of a six-wave survey suggest a strong emotional commitment to the tournament, in particular a pronounced sense of pride (90%) in being the first African nation to host football’s premier event.

The survey was conducted by international research company Sport+Markt immediately after the final draw in December. The successful organisation of this event and its blanket coverage in the media appear to have reinforced respondents’ belief in South Africa’s readiness to host the 2010 Fifa World Cup (84%) and their keen anticipation of it (86%).

Similar to the previous three waves, the vast majority of respondents have high expectations in terms of the potential long-term benefits of hosting the World Cup, both tangible and intangible. Those believing it will unite the people of South Africa stand at 79%, while 88% expect it to boost South Africa’s image abroad, 91% expect it to create more jobs and 95% think it will strengthen tourism.

“What these findings tell us right from the first round of surveying in December 2008 all the way through to today is that there is a strong feeling of positivity towards the Fifa World Cup among South Africans,” said Fifa secretary-general Jérôme Valcke.

“The scores have been consistently high with negligible deviation over the months.”

Of the perceived potential disadvantages of hosting the 2010 Fifa World Cup, inflation remains the biggest concern for South African respondents, with 70% believing consumer goods will become more expensive as a result of the competition.

However, the 7% point drop in this score since the previous wave in September 2009 represents the biggest fluctuation recorded in this survey.

The urban representative survey was conducted among 1 000 South African respondents in all major cities, including 2010 Fifa World Cup host cities, with quotas for ethnic origin, age and gender. Interviews was conducted face-to-face in calendar weeks 50-51, 2009. To request the charts or for further information, please contact marketingcomm@fifa.org.