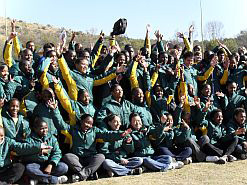 Shouts of joy echoed through many of South Africa’s poorer communities on the morning of 6 January 2011 as the previous year’s national matric results were released.

Several matriculants in these areas – with little or no family income, scant classroom resources and lack of transport – managed to rise above the odds and pass the exams convincingly, significantly boosting the profiles of the schools they attended.

Countrywide, there have been pass rate increases of between 10% and 50%, making matriculants’ families, schools and communities extremely proud.

Eddie Sebaya, principal at Raphela Secondary School in Johannesburg’s Orange Farm township, was chuffed after receiving his school’s results. “It’s really a dream come true for us to achieve these results. From the first term of the year we started working to ensure we improved our pass rate,” he said.

Education the key to a better life

“Education is the only way we can fight poverty and improve lives in our community,” said Raphela school matriculant Noluthando Khumalo.

“With a good matric pass, we can study further or get a good job and improve our families, and then our community. It was not easy, but we did it. We hope our results inspire those who follow us to do even better.”

Sebaya said his pupils had overcome many obstacles to achieve such good academic results. “This is a very poor community and our school has very few resources to work with.”

Key to the school’s success was making a few changes to help pupils study and grasp the subject matter.

“We asked the students to start coming to school earlier in the first term. This was to give them a chance to read and go through their work before classes started. They would then ask questions on anything they did not understand before starting on the new work of that day. The students committed to this and it clearly proved successful,” Sebaya said.

But this is only the beginning, the principal added. “The real hard work starts now, we have to maintain this kind of result, we cannot drop below 90% now. The community will expect us to keep up this kind of result and increase from here.”

Lethukuthula Secondary School in Katlehong, east of Johannesburg, grew its pass rate from 61% in 2009 to 97% in 2010. “Im really proud of the students’ achievement this year,” said principal Doctor Ngobese.

“We were determined from the beginning of the year to achieve this kind of pass rate. With the help of our governing body, who are the parents of the students, we realised our goal.”

“The learners worked hard throughout the year. They were very motivated. Parent involvement played an important role in ensuring the learners did well,” he said.

Thandi Hlogwane from Lugaju High School in Impendle, rural KwaZulu-Natal, said she had to walk vast distances to get to school, but it was worth every step. “I walked very far every day to get to school. There are no high schools near my house, so I had to walk for about two hours to get to school. I would leave home early to ensure I was at school by at least 6am, so I could start studying and going over my school work.”

Hlogwane got a distinction in mathematics and physics, and hopes to study medicine at the University of KwaZulu-Natal this year.

“Waking up early every morning and studying over the weekends while my peers hung out was all worth it. My dream is to be a doctor and I’ve achieved the academic results to realise that dream. Now my next step is to secure a bursary.”