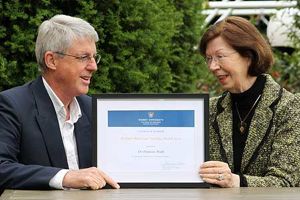 Dr Damian Ruth, a South African who is a management lecturer at Massey University in New Zealand, has won the College of Business’ Richard Buchanan Teaching Excellence Award.

Dr Ruth, who has worked at the university for seven years, described his job as a vocation and says when he teaches he wants to “ignite, provoke, enthuse and excite”.

Describing his teaching as direct and forthright, he says most students want to be constructively challenged. One student told him his frame of reference had been exploded. “If I have done that then I am doing a good job,” says Dr Ruth.

Dr Ruth has worked in education for more than 20 years and now teaches undergraduates and postgraduates in the School of Management on the Wellington campus as well as teaching in the MBA programme. “I don’t have a specific teaching qualification. I’m just one of a number of highly committed good teachers at Massey and I don’t see myself as particularly special,” he says.

He grew up in South Africa, where he graduated with a degree in arts and humanities from the University of Cape Town. He left South Africa after the 1976 riots but returned as a teacher. “I decided to become an educator, that would be my contribution to the struggle. If you get a handle on the education system you get a handle not just on the current generation but the next one as well.”

He did a Master’s in social science, followed years later by a PhD in research, education and management at the University of Sheffield. Next year, he will teach the new 300-level paper Strategy and Change, which he has co-designed.