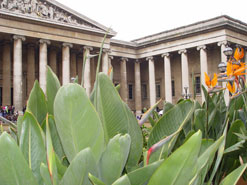 The main entrance of the British Museum peeks
over a display of Strelitzia reginae,
the bird-of-paradise flower.
(Image: Kew)

A recreated South African landscape, on show at the British Museum until October 2010, is giving Londoners a taste of the country’s rich biodiversity, and expats a taste of home.

A joint project of the museum and the Royal Botanic Gardens at Kew, the landscape is designed as a celebration of South Africa’s wealth of natural treasures. It coincides with the International Year of Biodiversity as well as the 2010 Fifa World Cup, which gets underway in Johannesburg in just under one month.

The two institutions are aiming to promote understanding and respect for various cultures, and to heighten awareness of the need for biodiversity conservation around the world.

The exhibit – which has a desert-like feel with sand, rocks and plants adapted for arid conditions – has been set up in the forecourt of the renowned historical and cultural institution and runs throughout the European summer, from the end of April until 10 October.

Visitors will be able to wander among the indigenous plants and trees before moving inside and learning more about the country through the museum’s extensive South African and African galleries.

All plants and trees included in the display are native to South Africa.

Highlights are the magnificent bird-of-paradise flower (Strelitzia reginae) – popular in flower arrangements, the prolific and dainty blue marguerite daisy (Felicia amelloides), and the quiver tree (Aloe dichotoma) – which grows in dry areas of South Africa and is favoured by the San Bushmen as quivers for their arrows.

These curiosities are interspersed with a colourful display of popular South African plants, such as the African lily or agapanthus, the pelargonium or South Africa geranium – not to be confused with flowers of the geranium genus – and the prolific grower Carpobrotus, popularly known as sour fig. This plant has bright pink flowers and succulent triangle-shaped leaves, whose juice has a multitude of medicinal uses.

Selected related items, such as rock art recreations and restios, which are part of the fynbos kingdom along with proteas and ericas, are scattered among the foliage.

Kew’s Garden Development Unit head, Steve Ruddy, supervised the installation. All plants were shipped with the necessary permits and were sourced with the help of nurseries in South Africa. They underwent a strict examination to eliminate the risk of transporting insects or diseases, and were then wrapped with great care before being shipped to the UK in a temperature-controlled container.

The journey by sea took a little less than the anticipated three weeks and the plants arrived in late March. Landscaping, which began on 29 March, took four weeks to complete.

While construction was still underway, the UK weather threatened to turn frosty, forcing botanical staff to protect the ill-adapted plants with a cover of fleecy cloth.

Once the landscape is dismantled, the plants will be given to the council of Camden, the London borough where the British Museum is located, to be planted in the area. Kew, meanwhile, will take in any specimens that may not survive the notoriously gloomy UK winter.

A number of events have been planned to add value to the exhibition, including talks by Kew and British Museum experts on rock art, traditional uses of plants, conservation and more.

Earlier in 2010 Kew reported that East and tropical Southern Africa were treasure troves of the botanical world, yielding more new species in 2009 than anywhere else. Of the 292 new species, two were discovered in South Africa. The greatest number – 67 – came from Tanzania.

The botanical institution has a number of projects running in Southern Africa, with the cooperation of partners in the region. These include the Millennium Seed Bank project – which is helping to save endangered plants in South Africa, Botswana and Namibia by conserving seed, ongoing research into propagation of threatened plants, and a database of South Africa plant DNA.

One of Kew’s most significant projects is one based near Grahamstown in the Eastern Cape province, which is promoting the sustainable use of plants for traditional purposes such as medicine, clothing, food and craft.

The communities in this area have been hard hit by HIV/Aids and the demand for traditional medicine, to complement antiretroviral treatment, is high. Careful management of resources will ensure that there are enough plants to meet the needs of every patient.