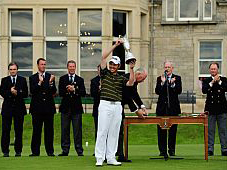 Louis Oosthuizen beat some of the world’s top golfers to become the fourth South African to win the British Open at St Andrews, Scotland, on 18 July 2010.

Oosthuizen, 27, took the lead with a birdie at the seventh hole early on 16 July, the second day of the oldest golfing championship.

This was his second victory outside South Africa, with his first being in March 2010 at the Open de Andalucia de Golf in Málaga, Spain. The win has catapulted Oosthuizen from 54th to 15th in the world rankings.

Speaking to the media after the tournament, he said: “It’s just unbelievable, just amazing. It’s probably going to hit me tomorrow or the week after. To win an Open championship is special, but to win it here at St Andrews is something you dream about.”

He thanked his parents and fellow South African golfing champ Ernie Els for the support they had given him throughout his career. Oosthuizen joined Els’s golf foundation at the age of 17.

Els, who won the British Open in 2002, said: “It would be difficult to find anybody in the world who is more proud of him right now. Long before anybody had heard of him, I thought that he was going to be an exceptional player.”

At the 18th hole, Oosthuizen sank a short par putt to win the tournament. He took off his cap in response to the roaring applause from the crowd, and then hugged his caddie, Zack Rasego.

“It felt so good, it was an unbelievable experience,” said Rasego. “He played so well the whole week and I have always had a belief that he is going to make it. He has been very good this whole week, he behaved well, he deserves it.”

After being presented with the coveted Claret Jug, Oosthuizen wished former South African president Nelson Mandela a happy birthday. He said that when he walked up to the 18th hole, he was thinking of the celebrated statesman, who turned 92 on the same day.

“It felt a bit special out there. What he’s done for our country is unbelievable. I would like to take this opportunity to say happy birthday to Mr Nelson Mandela back in South Africa,” Oosthuizen said.

Rasego echoed his sentiments: “It’s a proud moment for us, especially with the old man’s birthday and winning today on his birthday at St Andrews – it’s unbelievable, I’m really excited.”

Oosthuizen started the second day of the competition with partner Paul Casey, from the UK, hot on his heels from tee-off. However, at the eighth hole Oosthuizen three-putted for a bogey – while Casey had to take a penalty drop after hitting his tee shot into a bush. He wound up with a triple-bogey seven.

The South African was four shots ahead of Casey when the pair teed off on the 12th hole on the third day.

“It was actually very tight until the 12th,” Oosthuizen said. I’m proud of the way I held my nerves. I knew that I could throw a big lead away.”

He said he believed he had played well throughout the competition, but his biggest goal was to stay cool.

“It felt unbelievable walking down to the 17th and coming down the 18th. He was calm and played really well,” said Rasego.

Showing true sportsmanship, Casey also congratulated Oosthuizen for the way he handled the pressure: “That was an unbelievable performance,” he said. “He was very calm, played wonderful golf.”