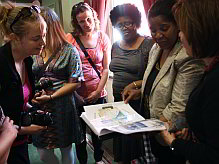 Nomonde Mda, head of Nompumelelo High School in Duncan Village, is surrounded by Dutch teachers from Leiden, part of an information exchange programme that saw the Dutch visitors accompanying their South African counterparts on visits to the poorer schools of Buffalo City.
(Image: Shamin Chibba)

Relationships between cities can be complex affairs, but Buffalo City Municipality (BCM) in the Eastern Cape seems to have handled its bond with the Dutch city of Leiden with consummate ease.

Representatives from both cities were present at the BCM mayoral office towards the end of 2010 to sign an agreement that would extend their relationship another five years, taking it to an accumulated 17 years in partnership.

Underlining this relationship is the law of give and take and this was emphasised by the deputy mayor of Leiden, Frank de Wit, who was one of the signatories. Even though the Dutch have been assisting BCM with major developmental projects over the past 12 years, he believes the relationship has been mutually beneficial.

“We have gained inspiration and education from this city. With the student exchange, Leiden students have been able to grow.”

De Wit stressed the need for both cities to continue learning through this bond. “One of the goals is to learn from each other’s cultures. We must listen to each other.”

He stated that the objectives for the next five years would not change.

“This renewal is an extension of the memorandum of understanding. We are going to start new projects but it is up to [Buffalo City] to decide which challenges to address,” said De Wit.

He noted that with the new Dutch government in place, relations with developing countries could become less intensive. However, Leiden’s involvement with Buffalo City would not dissipate.

“The [Dutch] government is not in favour of supporting developing countries, but we cannot leave it.”

The local chairperson of the Leiden platform, Dinesh Vallabh, was excited about the agreement, since it would continue to uplift the underprivileged.

“These projects are helping the poorest of the poor in the city. This is service delivery at its best,” he said.

BCM’s acting municipal manager, Andile Fani, also signed the agreement. He was optimistic about having Leiden on the city’s side during the 2011 transformation from a municipality into a metropolitan area.

“I am looking forward to this initiative. Seeing that Buffalo City Municipality is going to be a metro this will go a long way.”

Leiden’s involvement with South Africa began in the 1970s when the city, along with the Dutch capital of Amsterdam, campaigned for the abolishment of apartheid. When the system was finally scrapped, each Dutch city was told to form relationships with municipalities here. Leiden was paired with Buffalo City and began relations in 1998.

It started in June when Leiden officials contributed to the transformation of a dangerous floodplain, which killed six people in 2002 in the township of Duncan Village, into a habitable area for its residences. They donated R1-million (US$146 000) to the cause.

Acting Mayor Sizwe Dikimolo said changes were evident in the township and that further improvements could be made if residents cooperated with the municipality.

The Dutch continued their work when, in August, a group of Leiden learners, part of the Keys for Kids programme, converted a shed into a girls’ unit at House on the Rock, a childcare centre.

The project is an educational three-week excursion that brings a number of Dutch adolescents each year to partake in various developmental activities in the country, and learn about South African culture at the same time.

In October, 14 educators from various institutes in Leiden visited the city in an information exchange programme. Dutch teachers were paired with their South African counterparts and spent one week visiting poorer schools in Buffalo City. They learned about the techniques local educators employ when managing classrooms of over 50 learners, something that is unheard of in the Netherlands.

Vallabh believed that for some learners it would have been the first time they met a foreign national, and this would help expand their horizons.

“Our learners need to know of the world around them. They need to be shown a new way of life, which is an education in itself,” he said.

The educators who attended the programme had to pay their own air fares. “It just shows they want to add value to this trip,” added Vallabh.