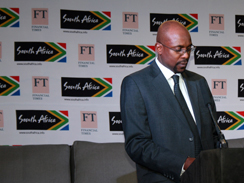 “Our hosting of the World Cup was, and has been, about the creation of new realities and the destruction of old myths and pessimism about South Africa, and indeed, the rest of Africa,” said Finance Minister Pravin Gordhan at a recent dinner hosted by the International Marketing Council (IMC) and the Financial Times.

The event, held on 22 July at Soccer City in Johannesburg, focused on what the football spectacular did for the country’s infrastructure and economy.

Previous government estimates were that the tournament would add 0.5 percentage points to South Africa’s 2010 GDP, but after taking spending on stadiums and infrastructure since 2006 into account, Gordhan said annual growth would be about 1% higher than it would have been without the World Cup.

Although the euphoria felt in the country during the World Cup would not last forever, the momentum it created would last for many years to come, Gordhan said. He said it was now up to South Africans to build on its accomplishments.

He added that hosting the World Cup helped change other countries’ perceptions of South Africa: “The tournament undoubtedly boosted our country’s standing internationally, showcasing its capabilities in delivering world-class infrastructure on time and without imposing a financial burden on the national fiscus.”

Now that the event was over, the minister said it was time to look at the lessons that could be learnt. He noted three key points that could be adopted by government:

“Firstly, complex challenges should be disaggregated into a number of clearly defined undertakings with budgets and cash flow.

“Secondly, using clearly defined projects, we need to develop a ‘roles and responsibility matrix’ that indicates which organisation does what work, and by when.

“Thirdly, the World Cup had an immovable deadline that all parties had to work towards and therefore an overall programme with individual project schedules, targets and deadlines was prepared. This kept the overall project tight with little room to manoeuvre …”

Was it worth it?

A panel discussion was also held at the dinner. This included Paul Mashatile, deputy minister of the Department of Arts and Culture and provincial chairperson of the African National Congress; Graham Wood, managing director of Southern Sun Hotels; Roshene Singh, chief marketing officer of South African Tourism; Nombulelo Moholi, managing director of Telkom; and Miller Matola, CEO of the IMC.

Financial Times bureau chief for Southern Africa Richard Lapper chaired the discussion. He asked the panellists if they thought the World Cup, and all the money spent on it was, in fact, worth it for South Africa.

“The games were priceless,” said Mashatile. “Soccer has really brought us together and it’s of huge value – I don’t think you can put a price on it. It was truly worth it.”

Wood said the tourism and hospitality sector benefited greatly: “Without the World Cup we wouldn’t have been able to grow our industry from where it was to where it is today.” More tourists coming here means more jobs for South Africans, which helps alleviate poverty, he added.

More than 3-million football fans, both local and foreign, attended the 64 games played at various stadiums around the country. In addition, there were more than 3 000 hours of broadcasting from South Africa, which included impressive images of the country in all its diversity.

This was also the first World Cup that used live 3D footage, which was transmitted through fibre-optic cables and satellites to televisions in 217 countries.

“The network development that came from the World Cup will be used after the event in South Africa. It is part of our legacy of training and development. The tournament has helped us accelerate our development plans that will last for years,” said Moholi.

Matola said the event was a great opportunity for rebranding the country: “It has changed historical perceptions about Africa and South Africa, and what we can do. This will attract skills and encourage foreign investment and business into the country.”

“The most important legacy of the World Cup is the renewed confidence in ourselves as a nation,” Gordhan said at the end of the evening.

“The conversation in South Africa today is how to build on this to tackle our most pressing social challenges: public education, health, and unemployment. Confidence is a key ingredient in any successful endeavour.”