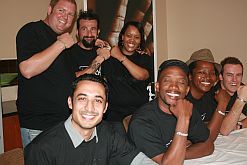 These comedians are planning to crack
their best jokes to raise funds for Nelson
Mandela’s charities.
(Image: Bongani Nkosi)

It’s no joke that South Africa’s top entertainers are going all out to help raise funds for Nelson Mandela’s charities.

The comic campaign, announced in Johannesburg on 23 February, will see 10 of the country’s most acclaimed heavyweight comedians teaming up for a one-night show at the Sun City Superbowl on 27 February.

The evening will form part of the celebrations marking the 20th anniversary of Mandela’s release from prison.

Charity drives organised around Mandela Day will also benefit from It’s No Joke, said 46664 South Africa campaign leader Ruth Rensburg. “We will be using comedy as a tool to highlight social injustices in the world,” she added.

“It is important that as comedians we give back to society …” said Forrest, who has been at the forefront of the South African comedy scene for almost 10 years. “If you find a project like 46664 to work with, that’s brilliant.”

“We make a living by poking fun at society, so it is good that we give back,” said Vlismas.

“We are using our abilities [for charity] in the only way we know,” Lindi added.

For Morake, arguably one of the country’s most accomplished and best-loved entertainers, It’s No Joke will be yet another opportunity to reach out to the less fortunate after years volunteering for community projects.

“It’s good to be the only chick [in the show], I’ll get to have all the men to myself for the night,” she joked.

The 10 comedians are expected to dish out some hilarious social commentary on the night, using humour to tackle pressing issues in South Africa.

Kau, known for his side-splitting shows Blacks Only and I Did These Jokes First, said he plans to make some strong comments about the South African education system at the Sun City event.

“Comedy is … a serious business,” he said.

The beauty of the comedy scene in South Africa is that entertainers can poke fun at any social issue without fear of reprisal – this is in stark contrast to their international counterparts, Vlismas and Kau said.

“We do socially relevant comedy. We seem to have a robust way of talking about each other,” Vlismas added.

“There are things we say here that they [UK comedians] could never get away,” Kau said.

Renowned UK performer Eddie Izzard kicked off the It’s No Joke charity campaign earlier in February with his comedy tour called Stripped, which sold out in South Africa.

There are now plans to expand the campaign and make It’s No Joke an annual event along the lines of the 46664 series of music concerts, Rensburg said.

“It should be nurtured into a premier comedy festival … hopefully it will become one of the gigs that every comedian wants to join,” Kau said.