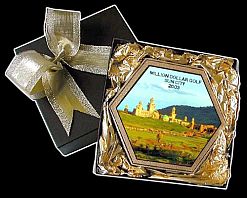 The delectable treats made by Chocoholic
Impact for Sun City in 2003.
(Image: Chocoholic Impact)

This year’s Oscar nominees will be sweetened up with more than just the promise of a golden statue: each star will also receive a delectable South African chocolate bar as a congratulatory gesture by the Los Angeles Times.

Chocoholic Impact, a small company based in Krugersdorp, west of Johannesburg, is exporting the sumptuous treats to the US for the much-anticipated awards ceremony on 7 March.

“The chocolate bars will be given to all the nominees, not just the ultimate winners, as a congratulatory token …” said Chocoholic Impact owner Ray Esmany.

The company, which Esmany started 26 years ago, will send 75 chocolate bars well-wrapped in golden envelopes to the US on 15 February. “Morgan Freeman is my favourite [nominee] and it’s exciting that he will have our chocolate,” Esmany said.

Chocoholic Impact supplies its chocolates to hotels, caterers, restaurants, the corporate market, weddings and, of course, to special clients for occasions such the Oscars.

Esmany said they have been exporting to the US for the past seven years and send off products there every week.

It’s not the first time the company, which has a partnership with a US agency called Candy Art USA, has supplied prestigious international events. “We have done work for the Grammies as well,” Esmany said.

And chocolate treats won’t be the only local sensation in the spotlight at the 2010 Academy Awards, as films with South African links such as Invictus and District 9 have been nominated for a host of prizes, including Best actor, Best supporting actor and Best adapted screenplay.

Chocoholic Impact has also scored big in supplying historic functions in South Africa. Its expertly crafted chocolate desserts tantalised dignitaries at the presidential inauguration of Nelson Mandela, in 1994, and at one of Thabo Mbeki’s inaugurations a few years later.

“We have done some exceptional work locally as well,” Esmany said. “The work we have done keeps me hugely passionate about my business.”

Esmany has been nurturing her venture since 1984, when she started making chocolates at home in the evenings after work. Back then she supplied schools and flea markets with simple chocolately offerings.

“I used to come home at night to make it,” she said. “It’s been a learning curve, as I started off not knowing anything about making chocolate.”

Her breakthrough came when she started supplying custom-made chocolates with various logos to businesses, including lodges and hotels, in South Africa.

Esmany now employs eight people on a permanent basis in her modest factory. Knowing that she has created job opportunities is what drives her passion for business.

“It’s a privilege to employ staff, to empower people,” she said. “It’s also a privilege that I’m able to give my employees good salaries.”

While their biggest exports are destined for the US, Chocoholic Impact also supplies markets in Canada, Australia, Ireland, Ghana, Namibia and Botswana.

Like most businesses Chocoholic Impact felt the bite of the global recession in 2009 and orders slowed down, especially from international clients. “We suffered as much as every business last year. We had to bite the bullet.”

But there are signs that South Africa is recovering from the downturn, and Esmany is certain that her venture is returning to normal.

“There are good orders for Valentine’s [Day]. Orders are generally good,” she said.

What has kept this dynamic woman in the game for so many years? “It’s very simple. It’s about developing new, unique products all the time.