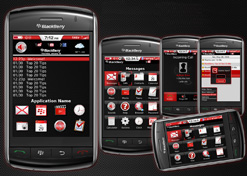 According to experts the smartphone revolution
has only just begun in South Africa.

Smartphones have made a dramatic entry into corporate South Africa, far surpassing general consumer use or small business use.

This is a surprise finding from a new research study released today by World Wide Worx. The Mobile Corporation in South Africa 2010 report reveals that three-quarters of South African companies have deployed smartphones in their organisations, compared to almost none two years ago.

The study, backed by First National Bank and Research In Motion (RIM), shows that saturation point has almost been reached by large South African companies in the use of fixed landlines (96%) and ordinary cellphones (92%). And, as forecast in 2007, 3G data card penetration has also reached near saturation, with 94% of large companies deploying it. Now the focus has turned to integration of smartphones with business processes.

“These results show that enterprise mobility solutions are no longer just nice to have,” says Deon Liebenberg, RIM’s regional director for sub-Saharan Africa. “They’re essential for businesses that want to be competitive, responsive and efficient in a world where a customer won’t wait for a salesperson who is visiting customers and where project flow can’t stop because a manager is at a full-day meeting.

“Not only does mobility allow companies to improve internal efficiencies and communications, it also enables them to interact more effectively with their increasingly mobile customers.”

The study also showed that corporate South Africa expects to embrace the new world of online services to an extent that was not even anticipated as recently as one year ago.

“Until last year, concepts like software as a service (Saas) and cloud computing were regarded as little more than buzzwords,” says Arthur Goldstuck, MD of World Wide Worx.

“These aren’t technologies as such,” says Goldstuck. “They are strategies that make the organisation’s use of new technology more efficient. From storage systems to software deployment, from hardware upgrades to network capacity to bandwidth, the focus is on cost-effectiveness, flexibility and mobility.”

Among the technologies expected to take off as a result of the Saas and cloud computing revolution are:

• Fixed-mobile convergence, with 72% of companies expecting to adopt systems that allow seamless connectivity between fixed and mobile networks.

• Virtualisation, with 65% expected to embrace this flexible and cost-effective approach to network and server technology.

• Outsourced storage and archiving systems, with half of large South African companies predicting they will be using it in the next 24 months.

The combined effect of these technologies is that, while the organisation’s buildings and infrastructure may still be confined to a specific site, its people, activities, information, documentation and data have been freed from location.

“We are literally seeing the foundations being laid for the company of the future,” says Goldstuck.

Liebenberg adds: “Smartphones are now mainstream devices within South African businesses, but the smartphone revolution has only just begun. Enterprises should now be looking at what smartphones mean for their businesses in a more strategic and holistic fashion. They need to work towards mobilising their core internal and customer-facing processes so that their employees can use ubiquitous connectivity to be productive and responsive wherever they are.”

The Mobile Corporation in South Africa 2010 forms part of the Mobility 2009 project, which included research among 1 000 consumers, 1 000 small and medium enterprisese and 240 large enterprises in South Africa.