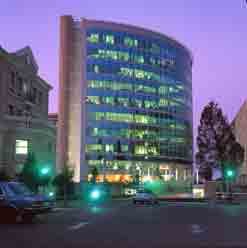 The JSE is by far the biggest securities exchange on the continent.
(Image: Walter Knirr, City of Johannesburg)

“We are very pleased with this achievement, which acknowledges the JSE’s record in terms of regulation and surveillance,” said Russell Loubser, chief executive of the JSE, South Africa’s only securities exchange.

“This ranking also sends a very good message about investing in South Africa. It is a testament to the effective working relationship between the JSE and the Financial Services Board,” Loubser said in a statement this week.

Released on 9 September, the WEF’s competitiveness report ranks countries according to 12 “pillars” or sets of criteria.

The study rates a country’s competiveness according to quality of infrastructure and institutions, efficiency, market sophistication as well as capacity for innovation.

Within this set of criteria, other rankings that demonstrate efficiency of local financial markets include: financing through the local equity market at seventh; availability of financial services at seventh; soundness of banks at sixth; and legal rights of investors at sixth.

The full report may be downloaded (PDF, 5.1MB).

Situated in Johannesburg’s new financial distict in Sandton, north of the city centre, the JSE is accountable to the Financial Services Board for the regulation of its markets, market integrity and investor protection. The two organisations work closely together on matters that could undermine investor confidence in South Africa.

“A well-regulated securities exchange is especially important to international investors post the global financial crisis,” the JSE said. “In the midst of the crisis, unlike many exchanges, the JSE did not ban short selling nor introduce circuit breakers.”