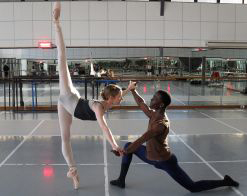 The South African Ballet Theatre (SABT) may be limping from the economic downturn, but it’s not letting that tarnish its reputation as the country’s most treasured and prolific classical dance company.

The global recession is largely to blame for the company’s financial crisis, said SABT co-founder and director Fiona Budd. The theatre survives on funding, but the recession has led to a number of benefactors pulling out.

Some of the former funders have resorted to supporting community establishments such as orphanages due to “social pressure”, and sponsorships of the 2010 Fifa World Cup “have also impacted us”, Budd added.

Although the SABT is debt-free, it recently announced that it is facing threatening financial challenges and desperately needs funding. Due to this it’s had to put all activities on hold, including an exchange programme to Cairo, Egypt.

The company launched an appeal for sponsorship in November and a number of generous individuals and companies have already responded, giving it a boost of R1.3-million (US$172 211). But this is just a fraction of the SABT’s annual budget of R12-million ($1.6-million), which includes monthly salaries of its dancers and management staff. It relies on funding for two-thirds of its budget.

“If everyone gives a little we can do a lot,” said Budd.

What’s even more encouraging, according to Budd, is that some donors have contributed far more than the asking sum of R2 000 ($264). Standard Bank made a donation of R10 000 ($1 325). Other companies that have responded to the call include South African Breweries, Air France, Sappi, First National Bank and Absa.

Scores of individuals have also made significant contributions, including Constitutional Court Judge Edwin Cameron, world-renowned artist William Kentridge and many others. The South African public is also being urged to participate by sending a mobile text message with the letters “SABT” to 39969. Fifteen rand (about $2) will be donated to the company for every message received.

“The campaign is promising. We hope that companies will inspire each other,” Budd said. “A number of people are phoning in offering their help.”

As a gesture of appreciation the theatre will give all contributing companies a 20% discount on tickets for its 2010 seasons.

The SABT has become increasingly reliant on outside funding because it has cut ticket prices to make productions more accessible to local audiences. “If we were to charge what we are supposed to charge no one would come to our seasons,” Budd said.

Attendance has been impressive over the years, with each season attracting between 10 000 and 15 000 people. But revenue from ticket sales covers just a quarter of the SABT’s budget.

“People [tend to] think that because the ballet company is glamorous it has a lot of money, which is not the case,” Budd said.

The company is also appealing to government for funding. “We are a national asset. [The company] is a platform that is used to showcase South Africa’s talent and something that the government can be proud of.”

Irrespective of the funding campaign’s outcome, the company won’t give up. “We are determined that we will never let it die. We are prepared to do whatever to keep it going.”

“It’s better if we go through difficult times now and then pick up again,” Budd said.

No stranger to adversity

The company has become a force to be reckoned with in South Africa’s dance industry since its establishment eight years ago. It was set up after the State Theatre Ballet in Pretoria closed down in 2000, and all the country’s top ballet dancers were retrenched.

Their fervent passion for South African dance meant that early retirement or emigration weren’t options, so they came up with creative strategies to form a new, independent ballet company.

The more experienced dancers – Angela Malan, Dirk Badenhorst, Karen Beukes, Iain MacDonald, Kimbrian Bergh and Budd – formed the steering committee of the new company, which came into being in January 2001. “We just jumped into the deep end,” said Budd. “It was a sacrifice.”

Their first plan was to assemble a team of danseurs and ballerinas to stage a production at the State Theatre as soon as was possible. The theatre paid them in advance, ensuring that the team had an income.

In March 2001 the SABT staged the timeless classic Giselle, which was hugely popular with attendance as high as 94%. “After that funding and sponsorships started coming in,” Budd said.

Giselle was followed by “a very well-received” tour to the cities of Port Elizabeth, East London, Welkom and Bloemfontein.

During their first few months the SABT also staged productions in established theatres such as the Playhouse in Durban and the Joburg Theatre. Their 2001 season of Swan Lake sold out completely.

The company continued to grow over the years, and in 2004 it moved into its new studios in Braamfontein at the Joburg Theatre. It has a contract with the theatre to use the facilities until 2012. “For a start we had our own facilities. We’re fortunate to be located here,” Budd said.

“The theatre is accessible. It has rejuvenated the whole area,” said SABT spokesperson Samantha Saevitzon.

The SABT has wooed audiences at home and abroad, rating its 2006 performance in Moscow, Russia, as “the most memorable”.

“We had a standing ovation – that was incredible,” Budd said.

Its impressive reputation means it often attracts top international dancers. Humberto Montero – one of SABT’s seven soloists – is from Mexico, while fellow soloist Roberto Curti is from Italy. Senior Corps de Ballet members Guy Wheatstone and Hyun Kyung Cho are from the UK and Korea respectively.

“We get applications from almost every country in the world, Cuba, China, India and many others … We’re recognised internationally for our work, people know that there is this ballet company sitting at the bottom tip of Africa,” Budd said.

Since its inception the SABT has worked hard at grooming potential stars, setting up the Graduates Programme in 2001 to for this purpose.

The programme is a full-time, year-long course. The students, who have to have completed high school, are selected through auditions and trained by senior principal dancer Angela Malan and Russian-born ballet master Alexei Ilin.

The SABT has selected 13 aspiring dancers for its 2010 programme. The annual auditions attract young dancers from all over South Africa, Saevitzon said.

As part of the programme the SABT gives its student dancers supporting roles in productions and offers various dance-related subjects to study. Those who shine throughout the course are employed as members of the Corps de Ballet and have a chance to grow in the company.

“That’s our aim, we want to have more home-grown talent,” Budd said.

The SABT has a strong social conscience and offers free ballet classes to 300 Johannesburg youngsters in the disadvantaged areas of Alexandra, Soweto, Katlehong and Sophiatown; and in Pretoria’s Mamelodi and Eesterus townships. It also offers free lessons in Melville and various other areas around Johannesburg.

For its efforts the company received the 2007 Proudly South African Nation Builder of the Year award.

The goal of the SABT’s outreach programme is to train young dancers so that they can go on to join the company or become professionals in other theatres. Budd said that some of them, being teenagers of around 14 and 15 years, will be ready to become junior professionals by the time they finish high school.

Promising dancers in the outreach programme are offered free extra lessons at the SABT’s Braamfontein studios. At least twice a week a group of 12 are bused in from Alexandra to get special training with Ilin.

“Definitely, the most talented will join our company. In Alexandra there are these two boys who are extremely talented,” said Budd.

Building on its initial success with Swan Lake and Giselle, the SABT has grown fond of staging all-time favourites, which also include Coppelia, Cinderella, and Sleeping Beauty. “Our audiences love the classics,” Budd said.

Because these productions bring in the numbers, the company has stopped doing new productions – they are just not financially viable. “If we do Swan Lake, for instance, we sell 15 000 tickets.”

“We are very good at performing the classics. Our dancers love them because they are very challenging [to perform],” Saevitzon added.

Despite its financial constraints, the SABT will stage two seasons next year at the Joburg Theatre. Swan Lake will be performed in March and the ballet adaptation of Carmen will run in August.