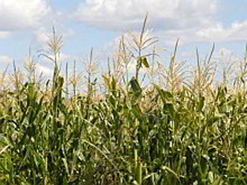 The development of hardier maize varieties will change the lives of millions of Africans.
(Image: MediaClubsouthafrica.com)

South Africa is one of the leading participants in research into genetically modified foods, and particularly maize, the most commonly grown staple food on the continent.

Professor Jennifer Thomson of the University of Cape Town’s Department of Molecular and Cell Biology is a principal authority on the subject and has been at the forefront of genetic engineering since the 1970s.

She now serves on the National Biotechnology Advisory Committee which advises the Minister of Science and Technology and has advised on the GMO (genetically modified organisms) Act, which was passed by Parliament in May 1997, followed by the regulations in November 1999.

According to Thomson, the state of GMO research in other African countries is very positive. One organisation making progress is the non-profit African Agricultural Technology Foundation (AATF), based in Nairobi, Kenya.

Its purpose is to develop or acquire biotechnology crops through royalty-free licenses. Intellectual property is transferred to African farmers, some of whom have become hugely successful.

Plant pathologist Dr Wilson Songa, the Kenyan Secretary of Agriculture, sits on the organisation’s board of trustees, while Thomson is Chairperson Emeritus.

Water deficiency is one of Africa’s biggest challenges, and negatively influences food production as well as economies in severely affected countries. Irrigation is expensive and out of range of the majority of small-scale farmers. Crop plants which can efficiently use what little water there is, and still produce an acceptable yield, will have the advantage in these arid areas.

One of AATF’s biggest projects at present is Water Efficient Maize for Africa which is funded by the Bill and Melinda Gates Foundation and the Howard G. Buffett Foundation.

The gene for drought tolerance is acquired royalty- free from Monsanto, a US-based multinational agricultural biotechnology corporation. It is bred into local maize varieties and is being tested in field trials in South Africa, Kenya, Uganda, Tanzania and Mozambique.

The International Maize and Wheat Improvement Centre, based in El Batan, Mexico, is involved in developing hardier varieties of both maize and wheat for developing countries.

The results of a study undertaken by the centre in 13 African countries were published in August 2010, and revealed that the distribution of new drought-tolerant maize varieties could improve yields by an average of 25%, help to alleviate poverty, and generate as much as US$1.5-billion (R10.5-billion) in benefits for consumers and producers.

Prof Thomson and her colleagues have focused their attention on the most destructive maize pathogen on the continent – the maize streak virus (MSV). This disease was first observed by entomologist Claude Fuller in KwaZulu-Natal province (known at the time as Natal), and described in his 1901 report as “mealie variegation”.

MSV occurs throughout Africa and causes one of the most serious viral crop diseases on the continent. Transmitted by insects, it manifests as pale yellow or yellow-white leaves, stunting the plant severely and often preventing it from producing complete cobs or seed. Research has shown that infection within the first few weeks of planting can result in a total crop loss, and devastation for farmers.

The development, through breeding or genetic modification, of a maize variety that resists MSV has been a priority in a number of African countries, among them Kenya, South Africa and Nigeria.

Locally, research into MSV resistance is now funded by the South African branch of the Pannar Seed Company, based in KwaZulu-Natal. The project was initially funded by the Claude Leon Foundation, a trust which supports postdoctoral research, then by the Rockefeller Foundation and South Africa’s Maize Trust.

The process is slow and expensive, which is why few academic research laboratories are able to undertake it.

South Africa has a GMO regulatory body which falls under the Department of Agriculture and is administered by the department’s biosafety directorate. There is a full-time registrar and any application is first directed to a scientific advisory committee and handled on a case-by-case basis.

The advisory committee advises an executive council, which is the decision-making body. The council consists of members from the health, environment, and trade and industry sectors, all of whom scrutinise the application closely.

The application is approved only if the council is satisfied, or it may be declined or sent back for more research.

Some organisations are opposed to the genetic engineering of foods. Biowatch South Africa, based in KwaZulu-Natal, is the main watchdog and was established in 1997 to keep tabs on issues of genetic modification, and promote biological diversity and sustainable livelihoods. Friends of the Earth and Greenpeace are also active in their opposition.

There are five main areas of controversy – safety, effect on natural ecosystems, gene flow into non-GM crops, moral and religious concerns, and corporate control of the food supply.

During the research process geneticists have to ensure that they don’t introduce a virus that can harm humans or animals. The Food and Agriculture Organisation has done extensive analyses and has shown that to date no modified foods are harmful in the short term.

GM foods are subjected to a battery of tests run by toxicologists. Although all findings are published in books or journals, access to literature on research carried out by government bodies is not always possible.

The concern that GM foods are inherently allergenic or cause physiological changes is not based in fact. Testing is rigorous and foodstuffs must undergo and pass the full range of tests before the regulatory body gives approval.

When asked about concerns of vegetarians and vegans, Thomson stated that there is no animal DNA in any GM plant that is eaten.

In his closing speech at the 2010 African Green Revolution forum held in early September in Accra, Ghana, former UN secretary-general Kofi Annan said , “I saw African scientists this week who are at the forefront of developing Africa’s own solutions to unlock agricultural productivity.”

One of the strategies for the future, said Annan, will be to boost investment in science, technology and research, in order to ensure food and nutrition security. He added that this would work only if it’s done on a sustained basis and in cooperation with farmers.

It is clear that Africa is taking responsibility for her own needs with a vision and the implementation of a plan. The key to understanding the future regarding GM products is knowledge. There are many publications freely available that debate both sides and without doubt, South Africa and other African states are on par with European countries and the US in the field of research and advancement in GM foods.