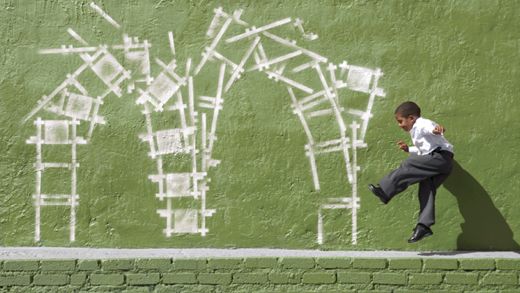 A still from Robin Rhodes’ Kinderstoel, 2011. (Image: via Neuberger Museum of Art) 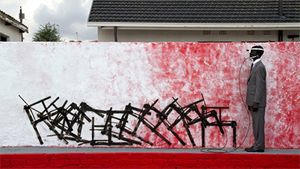 South African artist Robin Rhode has been named as the winner of the 2014 Roy R Neuberger Exhibition Prize, a biannual prize that “celebrates an exceptional artist with an early-career survey and catalogue”.

Animating the Everyday, an exhibition of his work, is currently on show at the Neuberger Museum of Art in New York until 10 August.

The 22 works in the exhibition, representing a 10-year survey of his digital videos, focus on the digital videos that Rhode identifies as “animations” and photographic series that correspond to or complement the time-based work.

“I come from a culture that is very spontaneous, that has a lot of humor and sarcasm. It stems from the South African mentality and has to do with freedom, and with the possibility of imagining or reinventing another world quite rapidly … Approachability and accessibility are fundamental to my work.” – Robin Rhode

“Rhode’s exuberant animations – created in the streets, studios, his parents’ yard in Johannesburg, and Berlin where he now lives and works – transform the quotidian into the playful and fantastic but include an underpinning of melancholy, danger, and risk,” the Neuberger Museum writes on its website.

“I embrace chaos. I don’t create a work only with the idea that it has to be lighthearted; there’s something dark underneath,” Rhode is quoted as saying during a recent visit to the Neuberger Museum.