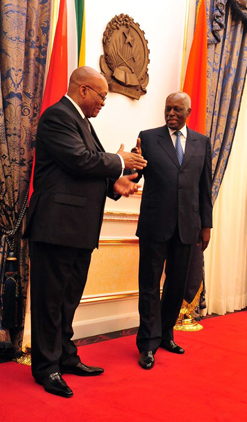 President Jacob Zuma’s recent visit to Angola, his first state visit to an African country since his inauguration in May 2009, has borne much fruit for the two countries.

Zuma was accompanied by 11 cabinet ministers and over 150 local business leaders – the largest delegation ever to accompany a president on an international trip.

Angolan President José Eduardo dos Santos, who invited Zuma to his resource-rich country from 19 to 21 August, said the historic visit signalled the start of a new era between Africa’s biggest economy and Africa’s biggest oil producer.

Dos Santos said South Africa had the skilled labour that Angola needed to help it build infrastructure and develop as a country following its 27-year-long civil war which was formally brought to an end in 2002. Vast stretches of Angola’s roads and many of its buildings were destroyed during the unrest.

Several trade agreements, which will go a long way in boosting economic ties between the two countries, were reached during Zuma’s visit. The most significant one involves a cooperation deal in the oil sector.

Under the agreement, state oil and gas company PetroSA and its Angolan counterpart Sonangol plan to work together in the exploration, refining and distribution of oil.

“Huge opportunities still remain in the petroleum and gas sectors in Angola with 28 of the 51 concessions offshore still to be licensed and explorations under way offshore,” reads a joint statement released by the two bodies.

Dos Santos and Zuma also discussed the distribution of electricity from the Democratic Republic of Congo’s (DRC) Grand Inga Dam hydroelectric project, which, according to project leaders, will be able to supply power to the entire African continent with enough left over to sell to Europe.

In between several scheduled meetings during the visit, Zuma took time to make an emotional pilgrimage to a former anti-apartheid camp where several cadres of Umkhonto we Sizwe (MK) died in exile. MK was the African National Congress’s (ANC) armed wing during the struggle against white minority rule in South Africa.

During this time Angola, through the ruling MPLA (Popular Movement for the Liberation of Angola) party, was an ally of the ANC and provided refuge for many political activists and military training for MK soldiers.

“This is to remind us where we come from and encourage us to work harder for the goals for which many lost their lives,” Zuma said at the ceremony.

During his visit Zuma also addressed a special seating of the National Assembly in Luanda where he formally thanked Angola for hosting political activists during apartheid.

“Angola was our home away from home during very difficult moments in the history of our country and our struggle,” he said.

“We would like to express our gratitude for the solidarity and comradeship that was extended by Angolans to the ANC and the people of South Africa during the struggle for our liberation.”

Zuma himself spent time in exile in Angola during the apartheid years.

Discussions between the two heads of state also centred on providing military assistance to other African countries, such as conflict-torn DRC.

During the talks Angola and South Africa, both of which currently have the biggest military forces in Africa, explored the issue of a unified peacekeeping force in that country.

The SADC is an inter-governmental organisation that works towards boosting socio-economic, political and security cooperation, as well as integration among 15 Southern African states.

“The organ [SADC] has been seized with various crucial matters such as the situation in Zimbabwe, Madagascar and others, based on the view that peace must prevail in Africa,” Zuma said.

“As the current chair of SADC, we will continue to support the inclusive government in Zimbabwe and render whatever assistance our capacity allows. We urge countries of the developed north to join the continent in assisting the people of Zimbabwe to lift themselves out of the socio-economic difficulties they face.”

Turning to business matters during his parliamentary address, Zuma outlined the sectors that will form part of the trade agreements between South Africa and Angola.

“The consultation mechanism will help us to consolidate and strengthen friendship and solidarity between the people of the two countries in various areas.

“These include trade and industry, mining and energy, defence and security, immigration, tourism, communication, science and technology, banking, transportation, agriculture, fishing and others,” he said.

Zuma also spoke to the business community of Angola during his visit, emphasising the importance of South Africa’s private sector in helping Angola strengthen its commercial industries.

Business Unity South Africa (Busa), who led the business delegation, met with their Angolan counterparts during the tour. Busa was formed in October 2003 through the merging of the Black Business Council and Business South Africa.

The body is hailed as one of the first truly unified business organisations in South Africa.

It was agreed that the already established Angola-South Africa Business Forum would be vital in coordinating business operations between the two countries.

“There’s a lot of energy, a lot of interest, a lot of commitment here at the moment, things are on the boil,” said Jose Severino, president of the Association of Angolan Industry, speaking to newswire AFP about the Busa meeting.

“Angola has many, many natural resources and then we see on the South African side there is potential [to] create excellent partnerships to further enhance the growth of our country,” said Severino.