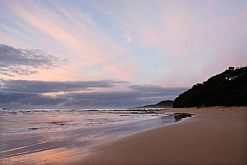 Expatriates living in South Africa have
decided that the country is one of the best
expat locations in the world.
(Image: MediaClubsouthafrica.com. For
more free photos, visit the image library)

South Africa is the sixth best country in the world to live in, according to expatriates based here. This was revealed in a massive global survey commissioned by global finance house HSBC Bank International. The study was conducted by UK-based research company FreshMinds. Results were released in late November 2009.

Over 3 100 expats, from more than 30 industries and living in 50 countries on four continents, took part in the study earlier in the year.

Titled Expat Experience, it sought to determine the challenges people encountered when living and working away from home, and also aimed to differentiate between the expat experience in various countries and on various continents, in comparison with home.

In the end 26 countries made the rankings. South Africa came in behind the top five of Canada, Australia, Thailand, Singapore and Bahrain.

As an expat favourite it eclipsed highly developed nations such as the US, France, Hong Kong, Germany, Switzerland, Belgium and the UK, as well as other emerging nations including Brazil, Mexico, China and India.

The survey is one of three reports released under HSBC’s annual Expat Explorer series of studies. The other two studies are the Expat Economics and Offshore Offspring reports.

South Africa was the only African country surveyed for the economics report, where it came 13th out of 26. The results of the Offshore Offspring report, which reveals the best place to raise a family away from home, are due out in early 2010.

The latest survey focused on the expat experience of mingling with local culture and society, and the increase or decrease in quality of life compared to the home country.

They were also asked to rate the ease with which they were able to perform a variety of tasks, including finding accommodation for their families and schools for their children, learning the local language, making friends among local and expat communities, and arranging their finances, vehicles, utilities, and other essentials.

South Africa was the top-ranked country for hobbyists, as well as the top country for settling down, beating Thailand and Canada which took 2nd and 3rd place respectively. More than half of those questioned – 55% – have lived in South Africa for more than five years.

South Africa was rated among the top nations in terms of the ease with which expats integrated into local society, which covered factors such as setting up their bank accounts, learning the language, and arranging healthcare.

According to the report, in most countries new arrivals gravitate towards the expat community when seeking new friends. Notable exceptions are Brazil, where 94% of people easily made local friends; followed by South Africa and Canada (both 91%); and India and Russia (both 90%).

South Africa’s worst score was 22 out of 26, in the transport category.

A global survey earlier in the year named Johannesburg as the most affordable city in the world for foreigners.

Results of the Cost of Living survey, regarded as the world’s most comprehensive study of this type, were released in March 2009.

Out of 143 cities on six continents, Johannesburg was found to be the cheapest, almost three times cheaper than the most expensive city, Tokyo.

The weakening of South Africa’s currency, the rand, against the dollar is said to be responsible for Johannesburg replacing Asunción in Paraguay as the least expensive location in 2009.