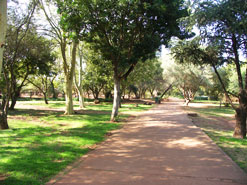 The national Zoological Gardens in Pretoria
is a world-acclaimed conservation
and research centre.
(Image: Wikimedia)

South Africa’s Department of Science and Technology has earmarked R2-million (US$266 306), to be disbursed over the next three years, for the National Zoological Gardens.

Most of the funds will go to the organisation’s new Centre for Conservation Science. This modern facility was opened in March 2009 by science minister Naledi Pandor, and aims to become a recognised centre of excellence in the spheres of conservation biology and conservation science.

“The establishment of this centre marks a milestone in the history of the zoological gardens and puts it amongst a select few zoos that have dedicated research capacity,” said Pandor during an official visit to the centre in April 2010.

“The centre’s focus on conservation medicine and conservation science places it at the forefront of innovation in zoo-based research.”

The public are encouraged to visit the centre and observe the researchers at work. This, said Pandor, would help enormously in building awareness of the importance of science in addressing conservation problems, and would also boost youngsters’ interest in a science career.

Not just a home for animals

South Africa’s main zoo is located in Pretoria and was founded in 1899, just after the outbreak of the Anglo-Boer War, by medical doctor Jan Gunning, who was also director of the Staatsmuseum, later named the Transvaal Museum.

Gunning took over the farm Rus in Urbe when its former tenants left to join the war, and quickly set about relocating a small collection of animals which were destined for the taxidermist to be put on display in the museum. The zoo received national status in 1916 and is the only facility in the country to have achieved this milestone.

The 80ha zoo is a national research facility run by the National Research Foundation, and must comply with strict criteria set by the independent government agency. These include access for researchers to all facilities, the establishment of international links, and the initiation of projects involving fundamental and applied research.

Until 2004 it was a cultural institution that fell under the Department of Arts and Culture, but its new designation since then has led to the establishment of a well-functioning department made up of the former research and veterinary divisions.

It is expected to contribute immensely to biodiversity conservation research in South Africa, and to serve as a source of future conservation scientists who will participate in the field on both a local and international level.

Current director Dr Clifford Nxomani said that the support of the science department and National Research Foundation would give the zoo the impetus to reach its full potential as a world-class research facility.

Some of the initiatives currently underway are the maintenance of national genetic databases for wildlife; a disease diagnostics facility and database; and the Shape Africa programme, which runs under the international Shape of Enrichment initiative and works to enhance the conditions of captive animals.

Over 7 000 animals, representing more than 600 species of birds, mammals, fish, reptiles, amphibians and invertebrates, make their home in the National Zoological Gardens. The collection is made up mostly of African animals, with around 30% representing alien species.

The animals live on four different sites which stretch across the Gauteng, Limpopo and North West provinces. They are the Pretoria zoo, two biodiversity conservation centres in Lichtenburg, North West province, and Mokopane, Limpopo, and the Emerald Animal World in Vanderbijlpark, Gauteng.

The two conservation centres were established in 1974 and 1981 respectively, while the 203ha Emerald complex, a satellite zoo and game park, was launched in 2001.

The South African animal institution is a member of the World Association of Zoos and Aquaria and contributes to a number of management programmes for endangered animals. It has also managed to establish successful breeding programmes for several endangered species – including Arabian oryx, lemurs, black and white rhino, and Cape mountain zebra – at its conservation centres.

About 200 000 school children visit the zoo annually, and for those who have no way of getting there, the mobile outreach vehicles connect with a further 5 000 pupils in outlying areas. Around 700 teachers attend workshops in Life Science education every year, while the ZooClub continues to innovatively educate children through activities such as nature trail walks and camping, talks, and visits to areas of natural importance like Maropeng.

The institution also offers assistance to undergraduate students for their projects. These include veterinary students from Onderstepoort, where Pretoria University’s Veterinary Science faculty is situated.