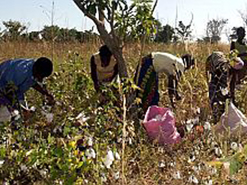 The funds will go towards Cottco’s inputs credit scheme, which facilitates funding for the emerging farmers.

“This is a first ever landmark investment in Zimbabwe by the DBSA,” Admassu Tadesse, group executive for the international division at DBSA, said in a statement.

“Through this investment communal and small-scale farmers will have access both to credit and capacity-building programmes which will empower them to grow more cotton.”

Cottco supports thousands of small-scale producers, who farm about 242 000ha of land in the Southern African country. DBSA said the organisation works with a wide network of farmers, and provides access to skills and infrastructure.

It provides farming inputs such as fertiliser, seed and chemicals through its credit scheme. These are made available during the growing season, under recommendations from Cottco’s agronomists.

Zimbabwe’s cotton farming sector has been negatively affected by a lack of funding in recent years, as has all other facets of the country’s agricultural industry.

Before the recent loan, funds had dried up for Cottco, which meant local farmers battled to access much-needed finance for their capital expenditure needs and day-to-day duties.

The developmental bank’s loan is meant to support the Zimbabwean government’s Short Term Economic Recovery Programme. The programme has identified agro-processing and agriculture as key priority sectors to drive the recovery of the domestic economy, Tadesse said.

The agricultural sector is the major backbone of Zimbabwe’s economy, and when it began to collapse in 2000, the entire country took a hard knock.

Widespread government seizure of commercial farmland through a controversial land reform act was at the heart of the crisis.

According to the DBSA, agriculture contributes up to 17% of Zimbabwe’s GDP, 60% of manufacturing inputs, 35% of foreign exchange earnings and 15% of formal employment.

“The Zimbabwean economy is heavily dependent on agriculture,” Tadesse said, adding that the bank believes that its loan to Cottco will be significant in supporting the revival of the industry, protect existing jobs in the sector and create new employment opportunities.

Cottco is expected employ more than 5 000 Zimbabweans during the next buying season, which will generate about R25.6-million ($3.6-million) in wages, according to DBSA.

DBSA aims to invest in projects that have potential to boost the economies of Southern African nations. It recently contributed R748 000 ($105-million) towards the expansion of Zambia’s Kariba North Bank hydro power station.

“The Zimbabwean investment is in line with the bank’s mandate and strategy to support development and viable projects in key economic sectors such as agriculture,” said Tadesse.

“Building sustainable regional economies remain a priority area that the DBSA will aggressively pursue to ensure that the region is prosperous, integrated and progressively free of poverty and dependency,” he added.