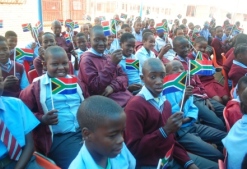 Pupils at Gontse Primary School in Soshanguve who were given a talk on dignity.

Ahead of Global Dignity Day on 20 October 2012, pupils at Gontse Primary School in the impoverished township of Soshanguve in Pretoria were given a course on dignity and self-worth by community-driven leaders of South Africa.

Speaking to the pupils were Amukelani Mayimele of Zayrah, the NGO that supplies books to war-torn areas in Africa, Neliswa Fente from SpringAGE, which is a movement of young South Africans determined to make a difference, Nicolaas Herholdt from Rotary, the renowned organisation of community service clubs, and Leo Makgamathe of Brand South Africa.

The event took place on 9 October, and the speakers were all well-received by Gontse Primary School as the pupils enthusiastically participated in the discussion of dignity. 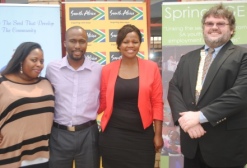 Dignity Day speakers Amukelani Mayimele of Zayrah, Leo Makgamathe of Brand South Africa, Neliswa Fente from SpringAGE and Nicolaas Herholdt from Rotary.
(Images: Cadine Pillay) Global Dignity Day was founded in 2006 by the World Economic Forum’s Young Global Leaders (YGL), who realised the one thing that everyone in the world wanted was their dignity to be recognised.

Since then they have worked with many other YGLs and other partners in over 40 countries, hosting what are known as Dignity Days. This involves going to schools and communities around the world and teaching a course of dignity to youth.

“The aim is to instil a new, positive, inclusive and interconnected sense of value in young people that will guide them as they grow,” says Phuti Mahanyele, YGL and chairperson for global dignity in South Africa.

Playing your part with dignity

“To play your part with dignity, you have to know that you are responsible for yourself,” Fente told pupils. “We are the solution to our own problems.”

Mayimele, founder of Zayrah, which also seeks to alleviate poverty and inspire Africans to better their lives, then urged the young pupils of Gontse to share their thoughts on dignity. Mayimele is also a One Young World (OYW) ambassador for South Africa. OYW is an NGO that connects young people with a desire to change the world.

Herholdt concluded the dialogue by sharing his experiences of dignity and the challenges he has faced when he was a young person. “In life, your dignity will always be challenged, but you have to learn how to be strong,” Herholdt said.

“Accept criticism, and accept that everyone is different and important. Be strong and know who you are.”

The speakers, on behalf of their companies, also donated gifts to the school in the form of learning aids and books. Pupils who took part in the session and shared their views on dignity with the others received certificates of participation.