My mom and I strolled down the beachfront, which the eThekwini municipality has paved most fantastically. They have a team of cleaners on duty all day who make sure bins are emptied and the area is kept litter-free. A long stretch lined with palm trees and plenty of place to sit, the concourse is a great place to stroll, cycle or just chill. 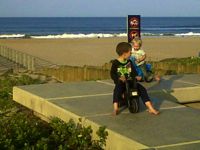 Seeing people putting this gorgeous open space to good use all weekend was such an uplifting experience. Couples ambled hand in hand, dogs on leashes happily led their owners along and on the beach the sand sculptors put the finishing touches to their works of art, which were well out of the range of the waves. One of them had written a goodwill message for Madiba on his sculpture of a dolphin.

There is a skateboarding rink and a shop nearby that hires out wheels of all description to suit people of every age and ability. It was fun seeing the littlies coming out on those small plastic toy motorbikes – and quickly reaching alarming speeds on them. The older ones opted for the go-karts decorated with scary decals of skulls and flames – some dicing each other and no doubt copying the worst excesses of adult drivers on the real highways. Moms, dads and kids bonded over bikes, happily sharing the concourse with the rickshaw drivers.

The buzz at the skateboard rink was infectious as the youngsters performed their mind-boggling stunts and the kiosk pumped out house and techno. Further up, Joe Cool’s competed with a booming bass beat on a loop and as the rikshaw man ran past, leaping and whooping and clanging a cow bell, it all added to the joyful atmosphere.

When we popped into the nearest supermarket, there was Indian rap playing full blast. I liked it so much I asked the manager if he knew the band but he said it was just 5fm.

Back at Belaire, we popped into the coffee shop, where they were playing some warm and funky R+B and we chatted to some tourists at the bar who said they were loving Durbs.

I’ve decided I’ll have quiet holidays and let’s say more lively ones. Benjamin Franklin was probably not a noisy guy but he was known to have an incurable curiosity and apparently it was he who said: “There will be plenty of time to sleep once you are dead.”