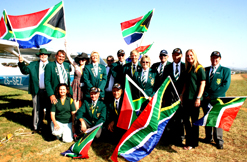 Team South Africa at the launch of the 2011
Precision Flying World Championships.

The 20th Precision Flying World Championships, sponsored by Brand South Africa and currently under way in North West province, will see 14 teams from around the world covering miles of unforgiving terrain to prove their unaided aviation prowess.

The international teams, mainly from Europe, arrived in the country on 17 October 2011 for practice and orientation, as South African topography is vastly different to that of their home countries. The first competitive stage takes place on 26 October and the winning team will be announced on 29 October.

Precision flying competitions are designed for solo operation of a single-piston engine aircraft, such as a Cessna 172. The sport is aimed at improving fundamental flying skills to enable a solo pilot to navigate and handle an aircraft under basic visual flying conditions without the backup of technical systems.

“Precision flying pretty much requires the skills that every pilot should have. We are talking here about accuracy, precise navigation, constant lookout, vigilant observation and inch-prefect landings,” says director of the 2011 champs, Antony Russell.

“Participants represent the cream of the crop in terms of these everyday skills. The younger pilots among us hopefully represent the continued respect for these skills in increasingly automated cockpits as technology takes over from good, solid aviation practice.”

The launch of the championships took place in
Brits, North West, on 23 October 2011.

The sport requires pilots to calculate an accurate flight plan using the most basic equipment, follow a precise flight path while sticking to a tight time schedule, complete observation tasks from the air to the ground while navigating the plane, and land it on short, narrow airstrips with trees and other obstacles on the approach.

During the first section the competitor works out the route details, taking into account the distance, ground speed, allocated time and wind factor.

During the second stage the pilot puts his or her calculations to the test by flying along the chartered course while keeping to the exact time constraints. The competitor’s map will have photographs and ground beacons marked on it, which will have to be identified from the air.

There are check points along the way and pilots are awarded penalties for every second they are late or early in reaching these.

They are also penalised for inaccurate identification of ground markers and photographs.

The third section comprises four different types of landings. During each type the pilot must put the aircraft’s wheels down on to a 2m-long stripe painted on the runway. Penalties are awarded for each metre long or short of the line. 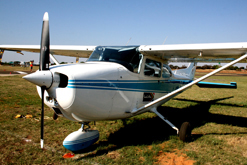 Precision flying started in the Scandinavian countries between the two world wars to create a set of skills that combined hunting, flying and cross-country skiing.

Participants would fly to a remote location, land in the mountains, ski to an allocated spot, shoot a target and then fly off to the next spot, to repeat the routine.

After the Second World War more countries became interested in the discipline and over the years a set of rules was drawn up to govern it.

Nowadays the sport is open to everyone, with stiff competition developing between southern hemisphere participants and their northern counterparts.