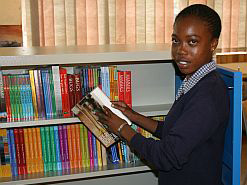 A partnership between the Telkom Foundation and Molteno Institute for Language and Literacy, the project is providing mobile wagons filled with study books to disadvantaged schools in the Eastern Cape, Limpopo, the North West and Gauteng provinces. A total of 56 high schools and 44 primary schools have been chosen as beneficiaries.

The schools were selected from across the country, according to Molteno’s CEO Masennya Dikotla. “The schools have been identified on the basis of need and are located in some of the country’s most impoverished areas,” he said.

Each wagon contains about 300 books, according to a Molteno official. Letsibogo Girls High received two wagons, as will all the other beneficiary schools.

“The book wagon concept is a mobile library that can be provided to needy schools very quickly,” added Dikotla. “A special focus is placed on subject matter such as science and mathematics, giving pupils rapid access to information. This allows them to build their knowledge and improve their chances of a brighter future.

“Additionally, the learning materials provided in the book wagons include reference books, novels, readers and mobile science laboratories to enable teachers and pupils to apply science and laboratory techniques in their learning environments.”

About 70% of the books have been distributed to beneficiary schools in the four provinces, said Molteno’s Brenda Ramokgadi. By the end of April all selected schools would have received their books.

“This, for us, is creating opportunities for our girls. I’m actually happy that the girls can have these resources without having to go out of the school,” said Letsibogo Girls High principal Ellen Kondowe.

Letsibogo, offering grades from eight to 12, received its book delivery during the first week of March. School librarian Cecilia Padi has already done a good job of inscribing the Letsibogo stamp on them. Pupils at the school would have access to their new books from 14 April, said Padi.

The school has an established library with more than 3 000 books.  “[The project] has helped us a lot. There are books with information we didn’t have before,” Padi said.

Padi, who’s full of praise for the project, believes the new books will be critical in helping the pupils enhance their literacy skills, while also helping them in their studies, which include science, mathematics and economics, among others.

Padi leads a school literacy project in the library, focusing on pupils in grades eight and nine, while they are fresh from primary. “I group them and choose a leader to guide them,” she said. “I develop them… not that I don’t care about other grades but these are children [grades 8 and 9] with problems on reading, spelling and writing.”

Attendance to the library project has been good, according to Padi. “They enjoy reading novels and that’s useful because reading does help them,” she said.

“What’s important is exposing children to reading, and to test their level of comprehension,” said Kondowe.

The mobile wagons will make it even easier for her to grow the study programme, Padi noted. “I will even visit classes with these.”

Molteno seeks to reach out

Molteno, founded in 1974, is an organisation seeking to improve literacy skills among learners. It has run projects all over South Africa and by 2008 had reached Angola, Botswana, Ghana, Lesotho, Malawi, Namibia, Uganda and Zambia.

The books project adds to other programmes Molteno runs or is involved in. “We feel privileged to form part of a project like this which reaches out to schools in need in our country,” Dikotla said.

“With this material and training, teachers can substantially improve the transfer of knowledge and provide a learning experience, giving more South African children better opportunities in the modern world.”